PHOENIX – Spice, a chemically treated blend of herbs marketed as incense but often smoked as an alternative to marijuana, is now illegal in Arizona.

Gov. Jan Brewer held a ceremonial signing Tuesday for a bill classifying substances used to make spice as dangerous drugs. Anyone caught making, selling or possessing spice can be charged with a Class 2 felony, which carries a minimum four years in prison.

“All law enforcement that we are aware of certainly support the bill and will enforce it and will prosecute under it,” said Brewer, who in fact signed the measure into law last Friday.

Because the legislation has an emergency clause, requiring approval from at least two-thirds of lawmakers in each house, it takes effect immediately.

Sponsors said spice, a mixture of herbs varying by brand and sprayed with chemicals that mimic the effect of tetrahycrocannibol, or THC, in marijuana, is dangerous because its side effects can vary by brand, batch and person. Those effects include seizures and paralysis that impedes breathing.

“We have taken an action and moved swiftly to protect public safety,” said Rep. Matt Heinz, D-Tucson, a hospital doctor.

“It’s a great day because this is a really bad, dangerous drug out there,” Reeve said. “The next step is law enforcement and making sure this is off the shelves, out of the smoke shops and our children don’t have access to it anymore.”

Spice is sold under brands including K2, Black Mamba and Wicked X.

In November, the Drug Enforcement Administration announced that it planned to temporarily ban on five of the chemicals used to create spice, though that ban has yet to take effect. Arizona’s law bans those five chemicals and adds five more.

Eleven other states have outlawed spice, and 20 more are considering bans, according to a news release from the governor’s office.

Heinz said spice came to his attention about seven months ago when he began seeing cases in his hospital, including a young man who suffered seizures and couldn’t talk.

“You can actually die from a terminal seizure where you’re seizing uncontrollably to the point where you stop breathing your heart stops and you die,” Heinz said. “There’s no way for me as a medical provider to tell you who’s going to experience those highly unpredictable, potentially fatal effects.”

– Composition: A mixture of herbs varying by brand sprayed with chemicals like JWH 018, that when smoked mimics the effect of tetrahydrocannibol, or THC, in marijuana. 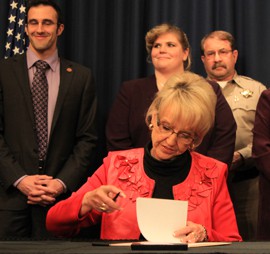 Gov. Jan Brewer holds a ceremonial signing for a bill outlawing spice, a chemically treated mix of herbs marketed as incense but often smoked as an alternative to marijuana. (Cronkite News Service Photo by Rebekah Zemansky) 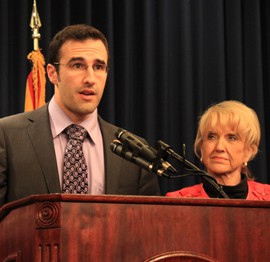 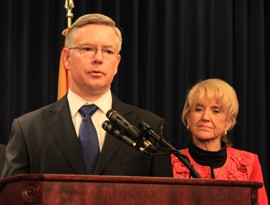