PHOENIX – A state senator wants stiffer penalties for owners or renters of properties that are used for drop houses, saying it would make them more likely to turn against leaders of smuggling rings.

“We really want to bust these rings because they kidnap people, hold them for ransom and sometimes even rape and abuse people,” said Sen. Kyrsten Sinema, D-Phoenix.

Sinema authored SB 1225, which the state Senate approved Tuesday on a 26-3 vote and forwarded to the House.

The bill increases the penalty for drop house owners prosecuted under forgery laws from a Class 4 felony to a Class 3 felony.

“The hope is that the frontman, who is usually the person doing the lease, would then give information about the ring leaders of the criminal activity,” said Sinema, who has introduced this bill, with the support of former Attorney General Terry Goddard, three times.

Under current statute, forgery is when a person falsely makes or alters a written document, knowingly possesses a forged instrument or presents a forged document that contains false information. Sinema said forgery applies to drop houses because owners and renters will often falsify documents about how a property is used.

Democratic Sens. Steve Gallardo of Phoenix, Jack Jackson of Window Rock and Linda Lopez of Tucson dissented. They didn’t explain their votes, but Gallardo said when he voted against the bill in committee that the penalty should be even higher.

A news conference Sinema held on the measure Tuesday was cut short by protesters who were in the hearing room as overflow for a committee that was hearing bills dealing with immigration. They chanted “no más” (no more), and some accused Sinema of not doing enough to fight anti-immigration legislation and criticized her bill as unnecessary.

Capitol police arrested four people who refused to stop chanting. Sinema left, as did several people scheduled to speak with her.

“I’m confused why people would be upset by this legislation,” Sinema said. “I thought we could all agree that drop houses are bad and that people who kidnap and torture other people should be punished.” 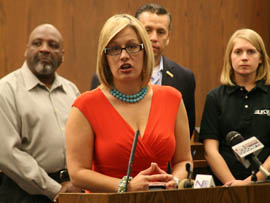 State Sen. Kyrsten Sinema, D-Phoenix, explains her bill to boost forgery penalties against those who own or rent properties used for drop houses. (Cronkite News Service Photo by Lauren Gambino)