NOGALES, Ariz. – For the past nine years, Michelle Sandoval has traveled from her art gallery in Tubac across the border to Nogales, Sonora, several times a week to deposit money into the bank accounts of the Mexican artisans she buys from. Doing so allows her to avoid wire transfer fees charged by U.S. banks.

But now that the U.S. arm of one of Mexico’s largest banks has opened a branch in Nogales, Ariz., Sandoval will be able pay her art suppliers from home, she said after talking to bank representatives about setting up an account.

Banamex USA, a subsidiary of Citigroup Inc., recently opened several locations in U.S. cities near the border. The bank, which specializes in commerce between the U.S. and Mexico, is trying to make business transactions between the two countries easier, said Jorge Figueroa, executive vice president of Banamex USA.

Part of that goal, Figueroa said, includes allowing customers who have Banamex USA bank accounts to transfer money for free into Banamex accounts in Mexico.

“Banamex USA serves both companies and individuals that do business in Mexico and the U.S., and Nogales is a key gateway for all the produce that comes from Mexico’s northwest,” he said. “There’s a lot of cross-border business that goes through Nogales.”

Anand Bhattacharya, a professor of practice with Arizona State University’s W.P. Carey School of Business, said the move probably is part of Citigroup’s larger strategy given that upward of 50 percent of the company’s revenue comes from international operations.

“It just makes sense, given the fact that there is so much commerce on both sides of the border, that there is a bank with Mexican roots opening in Nogales,” he said.

In creating a presence on the border, Bhattacharya said, Banamex USA is filling an important gap in commerce between Mexico and the U.S. by making it easier for American and Mexican companies to do business.

One of the challenges of conducting international business, said Nils Urman, a member of the Nogales Community Development Corp. board of directors, is finding an efficient and expedient way to make international payments.

“(Banamex USA’s) presence in the Nogales market is a great opportunity,” he said. “Up until recently there hasn’t been a bank in Nogales that is focused on international trade and commerce in terms of expediting international transactions.”

Urman said that the full potential of what the bank has to offer Nogales has yet to be realized as the location works to develop a client base and a presence in the community.

“This is a long term deal,” he said. “They just got their sign on the branch this week and they are just developing relationships, so it is going to take a while to build up clientele.”

Jorge Figueroa, executive vice president of Banamex USA, said the branch that opened in Nogales, Ariz., will give businesses on both sides of the border more options for doing business. 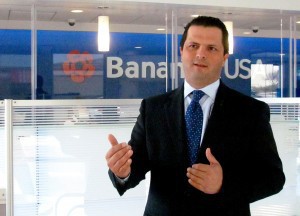 Michelle Sandoval, owner of Michelle’s Gallery in Tubac, Ariz., talks to tellers about opening an account at the Banamex USA branch in Nogales, Ariz. that opened in December. Sandoval buys art in Mexico to sell at her gallery. She usually travels to a Banamex branch in Nogales, Sonora, several times a week to deposit money to pay her art suppliers.

The Banamex USA branch that opened in Nogales, Ariz., allows customers to transfer money between their account and accoounts at Banamex in Mexico for free. 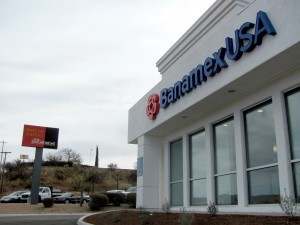