NOTE: This is one of a series of biographical sketches Cronkite News Service is producing about new members of the Arizona State Legislature. Each follows this format and includes a mugshot and video.

_ Legislative District: No. 24, which borders Mexico and California south of Lake Havasu City.

_ Highlights of Community Involvement: None.

_ Why She Ran: “I was a write-in candidate. Phil Townsend called me up one day, who is the chairman of the Republican party, and he said, ‘Nobody’s going to run against Amanda [Aguirre].’ I was furious.””

_ Her Focus: “Dismantling government as we know it. I think there’s a place for government, but I think we’ve gone way too far. We’ve forgotten about consent of the governed.’”

_ A Bill: SB 1412 is aimed at reducing voter fraud by restricting who is allowed to be in possession of another person’s ballot. It would make it a class 5 felony to tamper with any ballot. 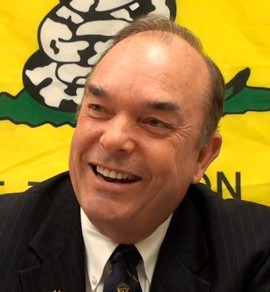