PHOENIX – Arizona ranks among the lowest-performing states in the nation for children’s health coverage, riding the bottom line for access, affordability and equity, according to a national report.

The State Scorecard of Child Health System Performance was released this month by The Commonwealth Fund, a bipartisan foundation that works to improve health care in the U.S. The report compared 20 indicators of health-system performance across the 50 states and the District of Columbia.

“The key problem is that in Arizona, kids don’t have access to affordable health insurance,” said Ed Schor, a pediatrician and vice president of Commonwealth’s State Health Policy and Practices program.

Arizona ranked 49th overall. The scorecard placed it 49th for equity, 47th for access and affordability, 45th for prevention and treatment and 38th for children’s potential to lead healthy lives.

The report, which examined 2009 data, doesn’t reflect Arizona’s health care system since it sustained deep cuts by Gov. Jan Brewer last year. Brewer has since frozen enrollment in KidsCare, Arizona’s federal children’s health insurance program, which served around 40,000 children at the time. As children age out of the program, it will disappear.

The report found that 15 percent of Arizona children were uninsured, the fifth-highest rate across the country, with Texas topping the list at 18 percent.

That rate jumps to 24 percent for Arizona families with incomes less than 200 percent of the federal poverty level, the qualifying rate for KidsCare, which currently has more than 80,000 children on its waiting list.

Schor said he recognizes that states have to make cuts in difficult times but added that chopping kids’ health care will come back to bite them in the long run.

Monica Coury, a spokeswoman for the Arizona Health Care Cost Containment System, which runs KidsCare, said the report calls for expanding children’s coverage but doesn’t grade the quality of the care itself.

“We rank very high in the coverage we do provide,” she said.

Tara McCollum Plese, director of government and media relations at the Arizona Association of Community Health Centers, said that since the KidsCare freeze children are going without care.

Her group’s more than 100 health centers, which offer general primary care, have seen huge increases in children without insurance, she said, which means facilities are losing revenue.

“[KidsCare] wasn’t free health care. These people were paying premiums to make sure their children were covered,” McCollum Plese said, adding that providers have been affected by the freeze because of that. “We can’t turn people away but they end up on a long waiting list.”

Those waits can be anywhere form three weeks to three months, she said. Instead, children needing care turn to hospital emergency rooms because parents don’t know where else to take them.

Nationwide, the report found that despite the recession, many states have expanded health care coverage for children and 35 states have improved children’s health coverage over the last decade.

But there are wide disparities, with the Northeast ranking at the top of the list and most Southwestern states at the bottom. 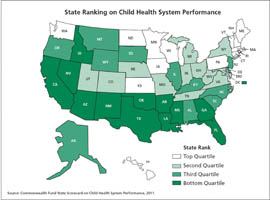