PHOENIX – Now that Arizona voters have approved the use of medical marijuana, employers need new ways to deal with employees who are impaired for any reason, a state lawmaker said Tuesday.

“Employers were left with their hands tied because they didn’t know what to do when it came to dealing with impaired workers who came to the workplace,” Rep. Kimberly Yee, R-Phoenix, told the House Committee on Employment and Regulatory Affairs.

Yee authored a bill, HB 2541, that would give employers the right to reassign or put on leave someone who works in a “safety-sensitive” position if they have a “good-faith belief” that person has used or intends to use a legal or illegal drug that causes impairment.

This judgment could be based on a drug test, though the bill’s definitions of good faith include observed conduct, lawful video surveillance or “information reported by a person believed to be reliable.”

Businesses would have immunity from litigation when taking any of the actions covered by the measure.

The committee endorsed the bill on 6-2 vote despite concerns raised by dissenters and even some who voted in favor that the bill could grant employers too much power at the expense of employees’ rights.

“I believe it gives too much power to employers and not enough to the employee,” she said.

Rep. Daniel Patterson, D-Tucson, who also dissented, objected to the language shielding employers from litigation. “I think we should only be doing that in very limited circumstances,” he said.

David A. Seldon, an attorney who crafted the bill on behalf of the Arizona Chamber of Commerce and Industry, said the measure is necessary for employers who want to make sure workplaces are safe and also comply with the medical marijuana law.

“Before, most employers who had a drug policy would have a no-tolerance policy, so if someone tested positive, that was all they needed,” Selden said. “Now, with the medical marijuana act, there’s a new increases in terms of impairment, so we needed some tools to look at employees who were on the job who were behaving in a manner that would suggest impairment.”

“I think, with all things said, this creates and understanding between employer and employee of what is right and wrong,” he said.

– Information reported by a person reasonably believed to be reliable.

– Results of a test for the use of alcohol or drugs.

– Other information reasonably believed to be reliable or accurate. 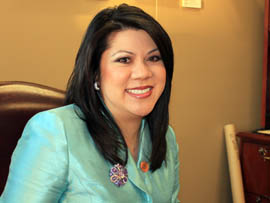 State Rep. Kimberly Yee, R-Phoenix, is sponsoring a bill she says would give employers more flexibility to deal with employees who might be using medical marijuana. (Cronkite News Service Photo by Rebekah Zemansky)