PHOENIX – When the domestic violence started, Karla didn’t know where to turn for help.

Her family was in California, and she had few friends in Arizona. She and her husband lived with his parents – and they took his side, she said.

“I told her [the mother-in-law] he hit me, she said I’d asked for it,” said Karla, who asked that her last name not be used. “She took the phone away from me and told me that her son was not going to be sent to jail because of me.”

It’s because of situations like Karla’s that advocates have decided to make one goal of Domestic Violence Awareness Month this October reaching friends and relatives of victims, who are often the first to see signs of domestic violence.

“Everyone thinks domestic violence is bad until the abusive person is their best friend, their brother, their employee, and then the victim is crazy, nagging, dramatic and it doesn’t exist,” said Elizabeth Ditlevson, deputy director of the Arizona Coalition Against Domestic Violence.

Along with understanding and support, she said, victims also need practical help, from child care and advice navigating the legal system to dinner and a place to stay for the night.

“As outsiders, our response is like, ‘Get out, leave – you need to do X, Y, Z,'” Ditlevson said. “And what people really need is someone to be there for them and to share your concerns but in a compassionate way.”

Surveys show that one in three women experiences violence ranging from verbal to physical attacks at least once during her lifetime. Many of those victims don’t come forward, Phoenix Detective Veronica Lumpkin said.

“We know for sure that domestic violence is chronically underreported, yet historically domestic violence calls have been the No. 2 call for service for the Phoenix Police Department, only behind false alarm calls,” Lumpkin said. “So can you imagine how many cases are going unreported?”

“In domestic violence, anybody that is around the victim is affected – anybody,” Meyer said. “Once it explodes, it’s really hard to even see the range.”

Meyer said that abuse often starts slowly and heats up gradually, in ways that aren’t always obvious to people in or around the relationship. She uses the metaphor of a train hurtling down the tracks to describe what victims of escalating domestic violence face.

It may take as long as 48 hours after an attack for a woman to reach counseling services at the Family Advocacy Center where Meyer works. By then, victims may start to think that the abuse won’t happen again – or be worried that if they leave, they’ll have nowhere to go.

“I keep yelling at you to get out of the tracks, get away from the tracks, it’s coming!” Meyer said.

For Karla, abuse would be followed by her husband’s promises that he would change.

“The next day, he would bring flowers to me,” she said. “Then months would go by and he would do the same things.”

Counseling at the shelter helped her identify the patterns and the danger. “If you allow it, they will escalate to blows or even death,” she said. 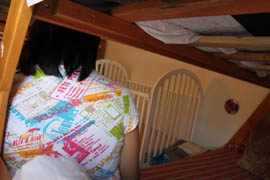 Karla, who asked to be identified by only her first name, said she came to a Phoenix domestic violence shelter after her husband’s abuse escalated. October is Domestic Violence Awareness Month, and officials and advocates are urging friends and relatives to look for signs to abuse and follow recommendations for helping victims separate from abusive situations. (Cronkite News Service Photo by Rebekah Zemansky)