“Marijuana for medical treatment is the foot in the door for legalization,” Kyl said at a news conference opposing Proposition 203.

McCain, who is running for a fifth term, pointed out that the medical community has declined to back medical marijuana.

“We obviously have great sympathy for those who struggle in pain or discomfort from debilitating diseases and medical conditions,” McCain said, “but this proposition is not the solution.”

Proposition 203 would allow those with qualifying medical conditions to receive 2.5 ounces of marijuana every two weeks from licensed dispensaries. Those living too far from a dispensary could grow up to 12 plants.

Arizona voters approved medical marijuana in 1996, but the measure never took effect because it required a doctor’s prescription, which is illegal under federal law.

Rick Romley, the interim Maricopa Country attorney, said that Proposition 203 is a stepping stone toward legalization without serious discussion of the issue.

“It’s a fair question of whether we should legalize it or not,” Romley said. “I welcome that debate. But they don’t want that debate.”

Yavapai County Attorney Sheila Polk said that the inclusion of chronic pain as a qualifying condition would lead to abuse. In states with similar laws, roughly 95 percent of users claim to have pain in order to get the drug, she said.

“This is not a tightly regulated scheme to dispense marijuana as medicine to the seriously ill; the opposite is true,” Polk said.

Standing by outside the news conference was Andrew Myers, campaign manager for the Arizona Medical Marijuana Policy Project, the lead group supporting Proposition 203. He said leaders often want to appear tough on marijuana use because they don’t want to seem soft on crime.

“Unfortunately, I think this policy is more supported by the people of Arizona than the leaders of Arizona,” Myers said.

– Would allow 2.5 ounces of marijuana every two weeks for those with qualifying medical conditions.

– Patients would need a doctor’s recommendation.

– Patients or caregivers could grow up to 12 plants if they live too far from a dispensary.

– Arizona Department of Health Services would issue licenses to dispensaries and identification cards to patients. 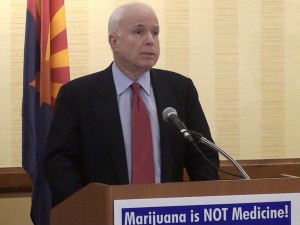