PHOENIX – Early ballots will be the first tallied on election night. And if history is a guide, they will also be among the last.

Election night is just the beginning for county election officials, who not only tabulate ballots cast on Nov. 2 but also count the slew of early ballots turned in on Election Day. The laborious process can drag final results out for a week or more.

“People don’t realize, if they don’t drop the ballots off until election day, we don’t count those until after the election,” Maricopa County Recorder Helen Purcell said.

Ballots that are turned in before election day are counted ahead of time and totals will be the first returns released Nov. 2. But those that arrive on election day go to the end of the line for counting. In close races, it can mean the election drags on for days.

“We don’t receive any of these early ballots until late that night, after the polling places close,” said F. Ann Rodriguez, the Pima County recorder.

The issue is particularly challenging in Pima and Maricopa counties.

First, the signature must be verified.

“It can take anywhere from a few seconds to 15 minutes to verify a signature,” said Kim Stewart, the Mohave County supervisor of voter registration.

Sometimes the signature on file doesn’t match the one on the ballot.

Christine Rhodes, Cochise County recorder, said even though her office has employees on hand who are graduates of signature-verification classes, they sometimes need to track down people to verify authenticity.

“The signature we have on file could be from when someone registered decades ago,” she said, “or perhaps their spouse signed or they had a stroke.”

After the signatures are verified and the ballots are processed, they are handed off to the elections department in each county for tabulation, which recorders said takes at least a few more days.

With 58 permanent employees in the Maricopa County elections department and an additional 150 on board for the election, the state’s most populous county needs all the time it can get before the election to tabulate the results, Purcell said.

In a state with races where every vote counts, Purcell and other county recorders say it’s crucial that their employees get hold of early ballots sooner because of the work that goes into processing them.

“We probably won’t finish counting until the end of the following week of the election,” Purcell said.

After that, each county recorder’s office is required to go back and count 2 percent of the precincts by hand.

For Maricopa County, that means 24 precincts.

Each county has a different canvass deadline. Maricopa County’s canvass of votes won’t be due until Nov. 22. The state canvass is Nov. 29.

For all the hassles, election officials say the early voting program is well worth it.

Matt Benson, director of communications in the Secretary of State’s Office, said two-thirds of registered Arizonans take advantage of the early voting program.

“It’s been hugely successful in terms of giving one more [voting] option,” Benson said. “We urge voters to get their ballots in before election day, but if they haven’t mailed them by Friday they should walk them into the polls.”

Purcell agrees; she would rather have citizens vote than not vote at all, even if it means delivering ballots to polling places on election day.

“We heard rumors that if it’s not a close race, we don’t count,” Purcell said. “But we count every single ballot and would never sacrifice accuracy for speed.”

– Two-thirds of states (32 plus the District of Columbia) offer some form of early voting.

– Nearly half of registered voters in Maricopa County requested an early ballot. 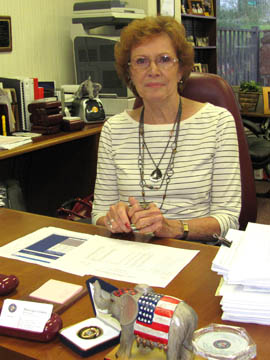 Maricopa County Recorder Helen Purcell wants to spare voters – and her staff – from as much work as possible dealing with early ballots that have to be counted after election day. The popularity of early voting and rules that allow people to turn in ballots at polling places on election day traditionally leave hundreds of thousands of ballots needing to be verified, a process that strains staffs and budgets and delays outcomes in some races. (Cronkite News Service Photo by Alyssa Newcomb)