WASHINGTON – The House is poised to take action on two Republican immigration-reform bills, but it was not clear Wednesday if House leaders would be able to muster enough support to pass either.

Democrats strongly oppose both bills, with even the more moderate of the two derided by Rep. Zoe Lofgren, D-California, as “a compromise between the Republican right wing and the Republican far-right wing.”

But those “far-right” Republicans did not appear to be on board with the compromise bill either, with the leader of the right-wing Freedom Caucus confronting Speaker Paul Ryan on the floor of the House Wednesday.

Meadows, chairman of the 30-member caucus, said that the compromise bill was “not ready for primetime.” The caucus’ 30 votes would be enough to stop either bill from passing.

Both bills would address the uncertain futures of DACA recipients, undocumented immigrants who were brought to this country illegally as children but protected from deportation under the Obama administration’s Deferred Action for Childhood Arrivals program. President Donald Trump moved to end the program this year, but courts have intervened.

The bills would also end the policy of separating immigrant families at the border. Trump signed an executive order Wednesday stopping that practice, but called on Congress to find a permanent solution.

Republicans agreed last week to advance the two bills in response to a bipartisan effort to force a vote on four immigration-reform measures from both sides of the aisle. That effort was just two signatures shy of the 218 needed before Ryan convinced his caucus to back the two GOP bills now being considered.

That angered Democrats on the House Rules Committee, which was debating the bills Wednesday night.

“You guys are afraid of a fair fight,” Rep. Jim McGovern, D-Massachusetts, said at the hearing. “You know that there are other ideas that would get bipartisan support that maybe your extreme right, the most xenophobic, bigoted aspects of your base won’t like if they pass – and that’s who you’re catering to, and it has to stop.”

But Republicans on the committee defended the measures, saying they would secure the borders while still leaving the U.S. with some of the most liberal immigration laws in the world. And they said the bills the Democrats were backing would almost have certainly been vetoed by Trump if they passed.

But Rep. Raul Grijalva, D-Tucson, gave little chance to the two Republican bills, which he called “the extreme wish list on immigration.”

“I don’t see either bill as something I can support, but more importantly I think they’re going to have a difficult time in the House anyway,” he said Wednesday. “And when they go to the Senate, they’re not going to go anywhere.” 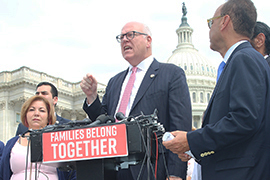 Rep. Joe Crowley, D-New York, joined other Democrats to rally against the policy of separating families at the border, which he said amounted to “psychological torture” of the children. President Donald Trump stopped the unpopular practice Wednesday. (Photo by Sarabeth Henne/Cronkite News)