WASHINGTON – President Donald Trump’s actions this week to dismantle Obamacare created what health experts called “political smoke” just weeks before the next open enrollment period, which they said could hurt enrollment for 2018.

Experts said Friday it’s unclear how much of an impact the changes will have, as some insurers set their 2018 plans with those changes in mind. But it’s certain to roil the markets.

“The biggest impact in Arizona is the potential confusion by consumers so they simply don’t do anything,” said Allen Gjersvig, director of Navigator and Enrollment Services at the Arizona Alliance for Community Health Centers.

“The announcement and political smoke gets in people’s eyes, and they don’t take action,” Gjersvig said.

But others called the president’s actions just another attempt to “sabotage the American health care system out of spite and pure politics.”

Protect Our Care Campaign Director Brad Woodhouse said in a statement Thursday that Trump’s “garbage insurance … will undermine the market, raise premiums, reduce coverage and expose millions of Americans again to discrimination based on pre-existing conditions.”

But in announcing the changes Thursday, Trump said it was Obamacare that was costing people coverage by driving up premiums and driving down the number of insurance companies that Americans in the ACA marketplace could choose from.

His solution is an executive order directing federal agencies to take steps to let small businesses join together in “association health plans” that would allow them to get the advantages of larger companies when shopping for insurance. It also expands the availability of bare-bones plans and calls for ways to make insurance available across state lines.

In a separate move Thursday, the administration announced that it is cutting off cost-sharing reduction payments, money that goes to insurance companies to help offset the cost of discounts the companies are required to give low-income consumers.

Those payments already faced one court challenge from lawmakers who said only Congress, not the president, could allocate money that way. Now, Trump’s decision to discontinue the payments has been challenged in suit by 19 states, including California and New Mexico, that say the president cannot stop the funding.

Jim Hammond, publisher of the Hertel Report, said the executive actions are “confusing” coming from an administration usually in favor letting states set their own rules. Hammond said association health plans often fail and are illegal in a lot of states “for a pretty good reason.”

While they “pull employers together for more bargaining power” and may initially offer lower premiums, he said, they can end up raising premiums in the long run as people, often those who are younger and healthier, take a cheaper coverage option, That creates a worse risk profile for the insurer, upping premiums and setting off a “death spiral.”

Hammond said cutting the cost-sharing reduction payment may not have an immediate impact because some insurance companies, such as Blue Cross Blue Shield, had set their 2018 premiums to account for the possible lost revenue. It remains to be seen whether insurers will change premiums before open enrollment begins Nov. 1.

“They have very short window to increase their rates,” said Gjersvig, adding that insurers “are still on the hook” for reduced premiums to low-income consumers, and may sue if the government does not fulfill its part of the agreement.

Michael Cannon, the director of health policy studies at CATO Institute, said he’s certain that canceling the subsidies will cause premiums to increase, but he predicts that only about 10 percent of premiums would rise “dramatically,” while most won’t be affected.

Cannon, pointing to previous court orders to end the subsidies during the Obama administration, said the suggestion that Trump is “sabotaging Obamacare is just nonsense.” The White House just “decided the court was right” and that it did not have the authority to make the payments, he said.

But Democrats and advocates were quick to blast Trump’s actions as political moves that will undercut the ACA and strip the coverage from low-income patients.

Democrats said Congress should work across the aisle and with healthcare professionals to craft legislation that both sides could support.

Rep. Raul Grijalva, D-Tucson, and other members of the Congressional Progressive Caucus wrote congressional leadership Thursday calling for bipartisan, bicameral legislation to fix the ACA rather than dismantle it. The letter said the administration’s actions “led many insurers to increase projected premiums by double-digit figures.”

But some Republicans hailed the president’s moves in light of congressional inaction.

“While his actions do not take the place of real legislative repeal and revitalization of free-market health care, he is doing everything possible to save Americans from crippling health care costs and decreasing quality of care,” Rep. Andy Biggs, R-Gilbert, said in a statement Friday. “At least there is one branch of government … that is concerned about keeping its promises to constituents.”

Gjersvig said there was a significant drop in enrollment last year, when candidate Trump was promising to repeal and replace Obamacare, “even though we had more outreach and exposure” then. The “confusion” from this week’s announcements could cause fewer people to enroll, or raise premiums for those who do.

Whatever happens, Woodhouse said, will be Trump’s to take credit or blame for.

“The Trump administration and every Republican in Congress who lets him do this, is now responsible for every rate hike people see for the foreseeable future,” Woodhouse said. “They broke it, they own it.” 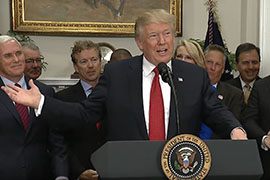 President Donald Trump said his plan to allow small firms to join together for better deals on health insurance, and to make coverage available across state lines, will bring “great, great health care” to “millions and millions” of Americans. (Photo courtesy the White House) 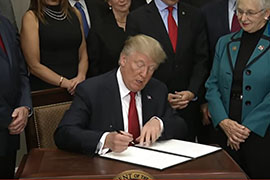 President Donald Trump signs an order designed to increase competition in health insurance markets. He also said the government will stop paying insurers to offset low-cost plans for low-income people, which experts said could have a greater impact. (Photo courtesy the White House)