EDS: An earlier version of this story had an incorrect name for one of the organizations quoted in the eighth paragraph. The correct name of that organization is the Association of Air Pollution Control Agencies. The story below has been corrected, but clients who used earlier versions are asked to run the correction that can be found here.

WASHINGTON – Arizona utilities and regulators said they plan to continue working toward the lower carbon emission goals that had been set in the EPA’s Clean Power Plan, even though federal officials said this week that they are scrapping the program.

Environmental Protection Agency Administrator Scott Pruitt said Tuesday that he will revoke the Obama-era plan, which set emission-reduction goals for every state but which critics said ended up handcuffing states.

Arizona had faced some of the nation’s steepest emissions cuts under the plan. But Arizona regulators said they would continue to work on the plan, and utilities in the state said they are still committed to cutting emissions, with or without the plan.

Timothy Franquist, director of the air quality division at the Arizona Department of Environmental Quality, said in a statement Friday that the state “was always on pace to meet the goals of EPA’s Clean Power Plan … due in large part to careful and prudent renewable energy planning by the Arizona Corporation Commission and Arizona’s electricity generators.”

He said the state will continue “applying state-level solutions that fall within the authority of the federal Clean Air Act.”

But one environmental advocate worried that, without the Clean Power Plan over their heads, there will be no urgency for state officials to work toward that goal.

“Arizona will have no plan in place for reducing carbon emissions, which, at a minimum, will mean more delays in action,” Sandy Bahr, spokeswoman for the Grand Canyon chapter of the Sierra Club, said in an email. “Delaying action on climate change is irresponsible and will place more of the burden on future generations.”

The repeal announcement did not come as a surprise to states, said Clint Woods, executive director of the Association of Air Pollution Control Agencies. The Supreme Court had blocked implementation of the plan on Feb. 9, 2016, in response to a lawsuit by states – a suit led by Pruitt, a critic of the plan who was at the time attorney general for Oklahoma.

Arizona was one of 24 states that sued to block the plan. ADEQ said on its website that after the court decision, the agency “decided to slow, but not stop, work on the Clean Power Plan.”

“The rule would have been a huge cost to Arizona taxpayers,” he said.

In a statement when he announced the repeal, Pruitt said Obama administration’s decision to enact the plan in 2015 was overreaching, “ignored states’ concerns and eroded longstanding and important partnerships.”

The repeal follows a March 28 executive order by President Donald Trump directing federal agencies to “immediately review existing regulations that potentially burden the development or use of domestically produced energy,” which he touted as a move to end “the war on coal.”

But repeal of the Clean Power Plan itself is not likely to bring back coal jobs, which have faced an ongoing challenge in the face of falling natural gas prices.

“The owners made the difficult decision to end their participation in NGS after it became clear that current and forecasted low natural gas prices had made coal generation there uneconomical,” said SRP spokesman Jeff Lane in an emailed statement.

Tobin called that an example of the market at work, and the Clean Power Plan an example of “the EPA overreaching, and part of their war on coal.”

“We’ve already been moving according to the market – that’s why you saw the closure of the Navajo Generating Station,” Tobin said.

Tobin said regulatory decisions should be left to the state and that he did not want “some Washington bureaucrat telling us how to live our lives” as the state works to regulate and modernize Arizona’s energy economy.

Woods said states will likely continue with local plans to reduce emissions, regardless of the federal plan’s status.

He cited Environmental Information Agency data that showed Arizona had achieved a 17 percent reduction in per-capita carbon emissions between 2000 and 2014, without the Clean Power Plan. Overall carbon emissions went up by about 8 percent in Arizona in that time period.

Lane said in his email that repeal “will not impact SRP’s ongoing efforts to reduce the carbon intensity of our generation resources and other operations.”

But Bahr worries that, “Without those laws in place, implemented, and strongly enforced, it is too easy for state legislators and agencies to do nothing or worse than nothing and permit more activities that harm our health and pollute the air and water.”

She agreed that market forces will continue the “war on coal,” but said regulators are missing an opportunity by repealing the Clean Power Plan.

“The economic aspects of coal are taking it down,” Bahr said. “There are plenty of clean-energy jobs to be gained, however, if the Trump administration and some Arizona politicians would stop erecting roadblocks.” 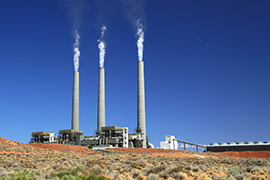 The Obama-era Clean Power Plan, which called for a 32 percent reduction in carbon emissions by 2030, would have hit coal-fired power plants like the Navajo Generating Station. Even though the plan has been scrapped by the EPA, it will not save NGS, which is being closed in 2019 for economic reasons. (Photo by Bill Morrow/Creative Commons)