WASHINGTON – Mary has helped hundreds of immigrants gain U.S. citizenship, but she hasn’t had the same luck with her husband’s case, one of more than 11,000 applications currently pending in Arizona.

That is nearly double the backlog of 6,307 cases at the end of 2015, according to data from the U.S. Citizenship and Immigration Services. Nationwide, it said there were 907,424 cases pending as of June 30, the last date for which numbers are available, compared with 388,832 in December 2015.

The agency said the backlog comes from delays caused by pandemic service reductions last year, on which it is still catching up. Critics blame Trump administration cutbacks at the agency. Whatever the reason, Mary and her husband are feeling the impact.

“The waiting periods the website shows have been a rollercoaster,” said Mary, a Phoenix resident who asked that her last name not be used for fear of jeopardizing her husband’s application. “They’re never consistent.”

Since filing his citizenship application in September 2020, Mary’s husband has seen repeated delays in his case.

Like many applicants, her husband is stuck at the halfway point of the ten-step naturalization process: After all the forms and documents have been filed and an eligibility determination has been made, but before an interview with a USCIS official has been held. That step includes a civics test which has questions about American government and history and, if they pass all those steps, a chance to take an oath of allegiance to the United States.

The USCIS field office in Arizona currently has COVID-19 mitigation measures in place, including a mask requirement and a ban on walk-in visits – appointments have to be scheduled in advance.

Mary, who has worked with Catholic Charities for 13 years helping people with their citizenship applications, said getting answers from USCIS is a challenge.

“No matter what you’re calling for, you’re going to have to wait at least an hour before someone picks up,” she said of the USCIS help line.

One legal expert said the slowdown is not new – just worse.

“This has been a long-standing problem,” said Mo Goldman, a Tucson immigration attorney. “We’ve noticed over the last few years a significant slowdown.”

Goldman said one client filed a “simple and straightforward” naturalization application in April 2020 and has yet to hear back, while others may only have to wait a few months.

“There’s really no rhyme or reason to why some are taking over a year while others are only taking a few months.” he said.

According to USCIS, current processing times range from 11 to 14.5 months in its Phoenix office and 5.5 to 14 months in Tucson. All of that follows more than seven years that a typical applicant has spent living in the U.S. as a lawful permanent resident before the application process begins.

Goldman laid most of the blame at the feet of the former Trump administration, which he said “did immigration no favors.”

But the USCIS blames the pandemic. The agency closed its field offices on March 18, 2020, in response to COVID-19, and did not begin to reopen them until June 4, 2020.

“These office closures account for the significant drop in naturalizations in March, April, and May of FY 2020,” the agency said on its website. Since then, USCIS has returned to “normal year production levels for naturalization applications,” it said.

But those months of waiting can weigh on applicants like Autriya Maneshni, a native of Iran who used to fear going through immigration at the airport. Now that she has her citizenship, she looks forward to fulfilling her dream of “slapping” her U.S. passport on the desk and passing through customs with no issues and without question next time she travels.

Maneshni was born in Tehran and moved to the United States with her family when she was 8. She, her parents and her brother spent more than a decade in the country as green-card holders before becoming citizens last year.

“We were very lucky,” Maneshni said. “We heard back very quickly compared to a lot of our friends.”

Her timing also helped: Maneshni filed her application in December 2019, heard back within a month and had her naturalization interview in February, the month before the pandemic shut down offices.

“It was definitely a weight lifted off my shoulders,” she said. “It’s unfortunate that not everyone can have the same quick and easy experience that I did.”

Despite the current backlog, advocates say people should not be afraid to apply for citizenship.

“Even if there is going to be a long waiting period, it’s better to apply sooner rather than later,” said Maria Sesmas, a volunteer with Promise Arizona.

People can use the waiting period as an opportunity to study for their interview, she said.

“Don’t be afraid to apply,” Sesmas said. “A lot of applicants go through the process in the span of only a few months.” 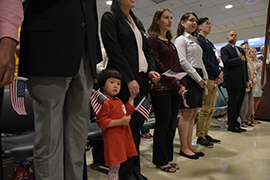 New citizens take the oath of allegiance during a naturalization ceremony in San Francisco in 2015. More than 900,000 citizenship applications are pending in the U.S., with over 11,00o of those in Arizona, as the pandemic and other issues have caused a backlog at U.S. Citizenship and Immigration Services. (Photo by Jetta Disco/Department of Homeland Security)