Ron Barber thinks it should be remembered nationally, too.

Barber testified Thursday in support of a bill that would make the January 8th Memorial in Tucson an “affiliated area” of the National Park System, a designation that he said “allows for our country to know it exists.”

“When you look at what happened that day, it has national and international significance,” Barber told a House Natural Resources subcommittee hearing on the bill. “When that shooting took place, it didn’t just affect the conscience of our community, it affected the conscience of our whole country and abroad.”

The proposal got a lukewarm reception from the National Park Service, which said it could not support affiliate designation until it has a chance to study whether the site “meets the criteria for national significance, suitability, and feasibility” for inclusion in the national park system.

“The Department appreciates the desire of the bill’s sponsor to bring greater recognition to the events of January 8, 2011,” said Mike Caldwell, the National Park Service’s acting associate director for park planning, facilities and lands. “However, we have no basis for knowing whether the proposed site meets the criteria for inclusion in, or affiliation with, the National Park System, as a study has not been completed for the site.”

Barber disagreed, saying during the hearing that “if this isn’t nationally significant, I don’t know what is.”

The privately funded memorial was dedicated on Jan. 8, 2021, the 10th anniversary of the shooting at a “Congress on Your Corner” event outside a Tucson Safeway, where Giffords, a Democrat, was meeting constituents when a gunman walked up and opened fire.

Giffords was grievously wounded by a shot to the head and has spent years in recovery, still walking with a limp and struggling with her speech. Barber, her aide at the time, was shot in the leg, and 11 others were wounded.

“I don’t use the word ‘lost’ because the truth of the matter is, they were killed. They were murdered,” he said.

He recalled over the phone Thursday how locals made three makeshift memorials “hours after the shooting” at Giffords’ office, the hospital where victims were treated and the Safeway where it happened.

“Some people prayed, some people read poems, some people brought candles or tiles with messages on them, flowers and all the rest,” Barber said. “The reason we built this memorial where we did is that it’s in downtown at a historic part of the downtown community, the historic courthouse, and it’s in public view now.”

The permanent January 8th Memorial stands in El Presidio Park, two curved walkways facing each other that represent the community’s embrace after the shooting. They dip down so viewers can walk along walls adorned with symbols honoring the victims, survivors and the Tohono O’odham who originally inhabited the area.

Barber, a Democrat who succeeded Giffords in office, said the memorial’s organizers “did everything we could to take it out of partisanship.” Fundraising was led by Giffords and local car dealer Jim Click, a Republican.

“What I think is important is that this doesn’t happen every day – thank God – and it’s never happened before that we’ve had those people who were federal employees, if you will, killed or nearly killed by a gunman who came to assassinate a member of Congress,” Barber said after the hearing. “That in and of itself merits national recognition.”

The bill does not ask the park service to take over the memorial, which is owned by Pima County, but it would allow the federal government to assist the county in marketing the site and would require federal development of a management plan. Barber said Thursday’s hearing was the first time he or the foundation heard of the park service’s position.

“They haven’t contacted us, but now that I know their position, I’m going to reach out to him on behalf of the board to see if we can turn him around a little bit on that,” Barber said.

The agency did not immediately respond to a request for comment, but a 2013 report by the Congressional Research Service said National Park Service affiliate sites “may receive assistance from NPS but typically are owned and administered primarily by nonfederal entities.”

In order to be deemed an affiliate, the report said, a site must “meet the same standards for significance and suitability” of NPS locations, “require some special recognition or technical assistance beyond what is available through existing NPS programs,” be run under the same rules of NPS locations and “be assured of sustained resource protection.”

The bill was sponsored by Rep. Ann Kirkpatrick, D-Tucson, and co-sponsored by seven of the other eight members of the state’s congressional delegation. Only Rep. Paul Gosar, R-Prescott, is not signed on.

Barber wished “we could have 100%” support from state delegation, but for the “90%, if you will, of the delegation supporting it, they understand what it’s about.”

“It’s about honoring people who were killed, those who survived and all of the people who came to our aid,” Barber said.

Rep. Raúl Grijalva, D-Tucson, said during the hearing that he “wished it didn’t exist” and “that we didn’t have to take the time to memorialize it.”

“Unfortunately, January 8th, 2011 is a day that Tucsonians and the nation is never going to forget,” Grijalva said. 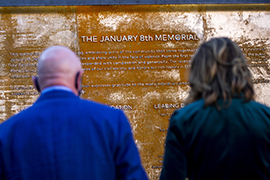 The January 8th Memorial outside the Pima County Courthouse is designed to evoke how the community came together after the Jan. 8, 2011, shooting that killed six and wounded 13, including then-Rep. Gabrielle Giffords, right, viewing the memorial with her husband, Sen. Mark Kelly. (Photo by Randy Metcalf/Courtesy Pima County) 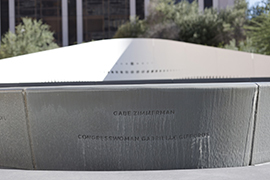 The names of victims of the Jan. 8, 2011, Tucson shooting, includine former Rep. Gabrielle Giffords, who was wounded, and her congressional aide Gabe Zimmerman, who was killed, are etched in the January 8th Memorial in Tucson. (Photo by Kasey Brammell/Cronkite News) 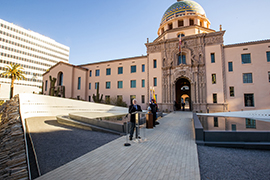 Former Rep. Ron Barber, who was shot in the Jan. 8, 2011, Tucson shooting, speaks at the memorial’s dedication on the attack’s 10th anniversary. The curving wall behind him is one of two meant to evoke the community’s embrace after the shooting. (Photo by Randy Metcalf/Courtesy Pima County) 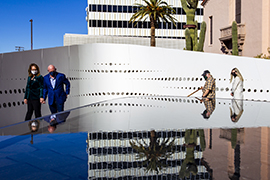 Former Rep. Gabrielle Giffords and her husband, Sen. Mark Kelly, tour the January 8th Memorial in Tucson last December, before its dedication on Jan. 8, 2021, the 10th anniversary of the shooting it memorializes. (Photo by Randy Metcalf/Courtesy Pima County)