WASHINGTON – Federal health officials told a Senate panel Wednesday that limited amounts of a COVID-19 vaccine could be available as early as November – but that doesn’t mean Arizonans are willing to try it.

“The public is going to need some convincing to take a vaccine when the time comes,” said Mike Noble, chief of research and managing partner of the polling firm.

The likelihood of getting vaccinated rose for older respondents in Arizona and for a vaccine that was produced in the U.S. The survey of 600 likely voters was taken from Sept. 8-10 and has a margin of error of plus or minus 4%.

The Arizona numbers are in stark contrast to a by NPR/PBS NewsHour/Marist Poll last month that found 60% of people nationwide would get vaccinated, 35% would not and only 5% who said they were unsure.

That choice could come as soon as later this year, said Centers for Disease Control Prevention Director Robert Redfield during testimony Wednesday on “Operation Warp Speed,” the government’s vaccine-development program.

Redfield told a Senate Appropriations subcommittee that a COVID-19 vaccine might be available to a prioritized few, such as first responders and health care workers, as early as November. But the vaccine will not be widely distributed until the second or third quarter of 2021, he said.

“I think we have to assume that if we had a vaccine say, released today, that it’s going to take us probably in the order of nine months – six to nine months – to get the American public vaccinated,” Redfield testified.

Redfield said the CDC is working with health departments in North Dakota, California, Minnesota, Florida and Philadelphia, to come up with a prioritized distribution plan for the vaccine. In a statement Wednesday, the Department of Health and Human Services said the overall goal of Operation Warp Speed is to “produce and deliver 300 million doses of safe and effective vaccines with the initial doses available by January 2021.”

But John Banzhaf, a public interest law professor at George Washington University, worries that a rushed vaccine could be dangerous. He said it normally takes two or more years for the trials and safety regulations before a vaccine is ready for production.

“It’s important to realize that there are many different problems if this thing isn’t adequately tested before release and it isn’t tested by some independent party,” said Banzhaf, who said others have worried about the pace of development and Redfield’s role in it.

“I think many people are beginning to doubt his reliability and begin to suspect that he may be under the influence of the president,” Banzhaf said. “And whether and to what extent that may be affecting his judgement. Many people are worried.”

“COVID is a unique issue in the sense that it doesn’t care what your political party affiliation is, your education level, your ethnicity,” Noble said. “And yet the numbers are pretty clear that it’s definitely turned into a political football when the issue doesn’t really care about it.

“A lot of folks are really unsure, so if there was a vaccine today, you’d assume, ‘Oh hey, we’ll all be good,'” he said. “However, due to this partisanship, I think a lot of people are weary on it, but also unsure and there’s kind of a ‘wait and see’ approach, due to the politicization of it.”

Redfield testified that the Food and Drug Administration has said it will approve a vaccine that proves to be “50% efficacious,” a threshold similar to what it requires for a flu vaccine. But there will still be hurdles to getting people vaccinated even then.

“I do want to be clear that as soon as this vaccine gets approved, we want to be in a position to distribute that within 24 hours,” Redfield said. “This vaccine has the potential to save a lot of lives in November and December, but we need to be able to get that vaccine once its approved. We need to distribute it as rapidly as we can.” 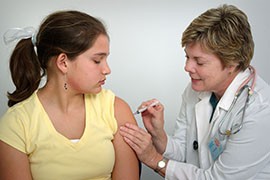 The head of the Centers for Disease Control and Prevention told a Senate panel that a COVID-19 vaccine could be widely available next year. But the majority of Arizonans in a recent poll said they were unsure about a vaccine, with just 35% saying they would get it. (Photo by James Gathany/CDC)