WASHINGTON – Federal officials said Wednesday that the western yellow-billed cuckoo should remain a threatened species, rejecting an appeal by miners, ranchers and other groups that claimed the bird no longer needs protection.

The critics had claimed that the original 2014 decision to list the western bird as a separate species from other yellow-billed cuckoos was flawed, and they argued that the cuckoo has since shown an ability to adapt to other habitats in its range.

But the U.S. Fish and Wildlife Service determined that the bird still faces threats from loss of habitat, encroachment and changes to waterways, among other problems, and that without protection it would become endangered.

The decision, announced in Wednesday’s Federal Register, was welcomed by environmental groups.

“Protection under the Endangered Species Act helps keep plants and animals from basically disappearing,” said Sandy Bahr, director for the Grand Canyon Chapter of the Sierra Club. “What we want is to have them listed while there are still enough that we can protect the habitat and further the conservation of the species.

“If these birds were delisted, there would be further loss of habitat and continued decline of the population,” Bahr said.

The Fish and Wildlife Service said the western yellow-billed cuckoo has “disappeared over much of the western U.S. and now occurs as a rare breeder in California, Arizona, New Mexico and west Texas.” The birds tend to nest in willows along waterways, “with nearby cottonwoods serving as foraging sites.”

In 2014, the agency declared the western birds threatened – one step below declaring it an endangered species – citing several threats to its habitat. Those included livestock overgrazing, agricultural encroachment, degraded water quality and sedimentation and other issues, including “to a lesser extent, effects of invasive species and the effects of climate change.”

But in a 2017 petition to the Fish and Wildlife Service, opponents said that the threats to the western birds “do not now and never have risen to the level that protection under the ESA (Endangered Species Act) is warranted.”

After years of review, the Fish and Wildlife Service disagreed Wednesday.

“We found that the threats identified in the final listing rule are still acting on the species and continue to affect the cuckoo’s viability,” the notice said. “In addition, minerals mining projects negatively impact recently identified occupied habitat in central and southern Arizona.”

Loss of the western population of the yellow-billed cuckoo would “leave a significant gap in the species’ range that would span seven entire States and substantial portions of five additional States in the United States, and six States in Mexico,” the agency said.

Bahr welcomed the decision, which she said is why the law is in place.

“The Endangered Species Act, it’s a lifeline for plants and animals and without it we would have lost a lot more of our wonderful, diverse wildlife in Arizona,” Bahr said.

“We’ve lost so much already of this habitat and we’ve lost so many species,” she said. “Let’s step up and do the right thing here.” 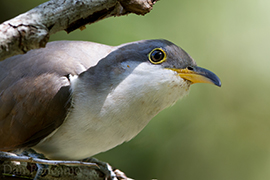 The U.S. Fish and Wildlife Service rebuffed a push by ranchers, miners to take the western yellow-billed cuckoo off the threatened species list, saying loss of habitat and other factors continue to affect its viability. (Photo by Dan Pancamo/Creative Commons)