WASHINGTON – Mary Ann Mendoza, the Mesa mom who became an evangelist for get-tough immigration policies, apologized Tuesday for retweeting a conspiracy-laden, anti-Semitic diatribe just hours before she was to address the Republican National Convention.

Mendoza was abruptly removed from Tuesday night’s lineup of speakers, where she had been scheduled to have a prime spot on the second night of the convention.

The Trump campaign did not cite the tweet, but said in an email shortly after Tuesday’s convention had started that it had removed Mendoza’s “scheduled video from the convention lineup and it will no longer run this week.”

The tweet, since taken down, was first reported by the Daily Beast. It encouraged Mendoza’s almost 41,000 followers to unroll a Twitter thread that tied Jewish bankers to the Titanic, the Kennedy assassination, global government and alleged crimes of past administrations.

Mendoza apologized for “not paying attention to the whole message. That does not reflect my feelings or personal thoughts whatsoever.” But that did not appear to be enough to keep her as part of the convention.

The furor overshadowed what was to have been an RNC address telling the story of her son – killed by a drunken driver who was in the U.S. illegally – and praising President Donald Trump.

Mendoza was inspired to activism after her son, Mesa Police Sgt. Brandon Mendoza, was killed by a drunken driver who was in this country illegally. It was the day after Mother’s Day 2014 when Brandon, heading home from a shift, was hit by the wrong-way driver.

Mendoza described her son as an integral part of the community who helped keep kids in school, hosted Thanksgiving dinners and checked in on the elderly. In the aftermath of his death, she became a founder of Angel Moms, a group of people who have lost loved ones to crimes committed by undocumented immigrants.

Mendoza shared her son’s story at the 2016 RNC alongside other Angel parents. She became a strong supporter of Trump’s immigration policies

She has since been invited to the White House on multiple occasions and was a State of the Union guest of Rep. Andy Biggs, R-Gilbert, in 2020. Biggs on Tuesday morning called her “a dear friend, and a fierce advocate for protecting innocent Americans from criminally violent illegal aliens.”

She has publicly voiced the need for stricter immigration laws to keep people out of what she calls the revolving door at the borders and was a supporter of We Build the Wall. That group, which proposed privately funding a border wall, made headlines this week when several of its principals were charged with fraud.

An advance copy of the speech she had planned to deliver Tuesday urged support for Trump, “the FIRST political leader we’ve ever seen take on the radical Left to finally secure our border and to end illegal immigration since day one.” In a preview of her speech on Fox News Tuesday morning, she also said she planned to call for support of law enforcement and call out sanctuary cities.

But she was yanked before she could deliver that speech, a move Trump critics demanded as soon as the tweets became public.

“There’s no place for Mary Ann Mendoza’s anti-Semitic views. Sadly, under Donald Trump’s watch, anti-Semitism is on the rise and is now in the front and center at the Republican National Convention, “said Kyle Morse, a spokesperson for American Bridge 21st Century. “The RNC needs to remove her from their program – plain and simple.”

Requests for comment from Mendoza and the RNC were not immediately returned Tuesday evening. 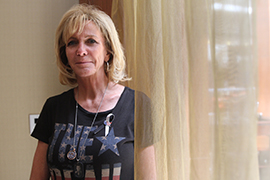 Mary Ann Mendoza, in 2017, wears a necklace with the face of her son, Brandon, a Mesa police officer killed in a 2014 car crash with an undocumented immigrant. Mendoza was to bring her story to the Republican National Convention, but was abruptly pulled from the speakers list after it was learned she had retweeted anti-Semitic statements. (File photo by Megan Janetsky/Cronkite News)