EDS: A previous version of this story incorrectly characterized former South Bend, Indiana, Mayor Pete Buttigieg’s campaign in the 16th graf. The first openly gay candidate to seek a major party’s presidential nomination was Republican hopeful Fred Krager in 2012. The story below has been corrected, but clients who used previous versions are asked to run the correction found here.

WASHINGTON – Dennis Gastineau had a feeling it might happen.

“I had a sort of sense as I was putting it in the mailbox that I should hold on to the ballot to see what happens,” Gastineau said last week, just days after Klobuchar dropped out. Gastineau calls it “the downside of early voting.”

He is likely not alone. The steady increase in early voting, combined with an unusually high number of Democrats jumping in and out of a crowded presidential primary, has created a situation where many Arizona voters will see their votes counted – but not count toward the final outcome.

When voters go to the polls Tuesday, they will be handed a ballot with the names of 18 Democrats who were running for president – 12 of whom have pulled out of the race since the ballots were printed in December. Voters next week know that; early voters did not.

It’s part of what Thomas Schwartz calls an “unexpected hazard to early voting.”

Schwartz, a political science and history professor at Vanderbilt University, said it is not unusual for multiple candidates to drop out before an election, but “what is unusual though, is the phenomenon of early voting and having that opportunity before a culling takes place.”

It has become more of an issue as early voting has grown in popularity in recent decades.

“Early voting has really expanded so much in the last two decades, in a way that it hadn’t in the past,” Schwartz said. “It should probably be addressed by state legislatures and the rest who do it, in the sense of limiting the time allowed beforehand to vote in the primary elections.”

State election officials could not immediately say how many early ballots in Arizona were returned by March 3 – Super Tuesday, which completed the Democratic shakeout – but just under 300,000 had been returned by the start of this week, with about a half-million still out. The U.S. Election Assistance Commission reported that 75% of Arizona voters cast early ballots in the 2016 presidential election, one of the highest rates in the nation.

Jonah Goldberg, editor in chief at The Dispatch, thinks election officials may have made early voting too convenient and that the problem of phantom candidates on the ballot is only likely to increase.

“It used to be that you needed some sort of special dispensation to mail in your ballot, like if you were serving on a military base overseas,” Goldberg said. “But now it’s simply a way to pander to people’s expectations that they shouldn’t be bothered to make the effort.”

Goldberg thinks the long early-voting periods “actually just sort of change the nature of our democracy, so that people can do a checkbox vote and then not pay attention anymore or vote for the wrong person.” He said a better way to get people motivated to vote is to make Election Day a holiday and voting an event, with “certain rituals, and one of them is waiting in line to vote.”

“The way you can do that is by making people care about voting more, not by making it so easy that you can do during a commercial break of ‘American Idol,'” Goldberg said.

But Arizona voter Kathryn Sullivan Graf said she was happy to have the chance to cast an early ballot – even if her candidate was one of the many who dropped out.

Graf said she does not regret her vote for Pete Buttigieg, the former mayor of South Bend, Indiana, and the only major candidate in this primary who is openly gay. She said she is not troubled by the large number of candidates on the ballot, even though most are no longer running.

“I think it’s great that so many people were trying,” she said last week. “It’s a large shame that it has narrowed down to pretty much older white men and I don’t think that displays the diversity that the Democratic Party has to offer.”

Matt Grodsky, spokesperson for Arizona Democratic Party, said votes like Graf’s will not go to waste, even though party rules require a candidate to earn at least 15% of the vote before they can win any of the state’s 67 delegates.

“So even if people are casting their ballot for a candidate that has dropped out and is no longer in the race, that delegate still technically goes towards that person,” Grodsky said. “It’s not necessarily a completely wasted vote because it’s not a winner-take-all delegate primary process.”

Grodsky believes many voters will hold on to their ballots until after Sunday’s debate in Phoenix, and turn the ballot in after that. And OH Predictive Insights reported this week that almost 60 percent of Arizona early voters were still hanging on to their ballots as of Super Tuesday and could make a last-minute change.

Grodsky said it is not unusual to have a large number of candidates fall off the ballot, but Brad Nelson, director of the Elections Department for the Pima County Recorder’s Office, said this year is an outlier, with two-thirds of the primary ballot no longer running.

“I don’t think we’ve ever hit that high of a percentage of withdrawals,” Nelson said.

While votes for those zombie candidates will still be counted, and may even win delegates, Nelson said “it won’t really have much of a difference” in the final outcome.

Tom Collins, executive director of Arizona Citizens Clean Elections Commission, said there is still a slim chance for early voters to change their ballot if it’s marked for New Jersey Sen. Cory Booker, who dropped out in December, or Massachusetts Sen. Elizabeth Warren, who dropped out last week. If they still have the ballot, Collins said, voters can go to their polling location and ask officials there to “spoil” the marked ballot and issue a new one.

Amy Dacey, executive director of the Sine Institute of Policy and Politics at American University, said it is possible candidates who dropped out could encourage followers to spoil their ballots and cast them for a candidate they endorsed. But she acknowledged a lot of “what ifs” in that scenario, at a time when “things are changing very rapidly.”

Both Graf and Gastineau said they’re trying to decide which of the remaining Democrats to support. But Graf said that, in a way, she is glad she voted when she did – when Buttigieg was still a candidate.

“I’m very happy I had the chance to vote for Pete,” she said. “As a matter of fact, I would have been more disappointed, I think, if he had dropped out and our election was weeks for months off.

“He’s the only person I would have truly felt wholeheartedly positive about voting for,” said Graf. 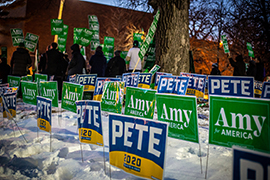 Campaign signs for Democratic presidential hopefuls Pete Buttigieg and Amy Klobuchar outside a January debate at Drake University in Iowa. Both have since dropped out, but their names remain on next week’s Arizona primary ballot – along with 10 other Democrats who have dropped out since ballots were printed. (Photo by Phil Roeder/Creative Commons) 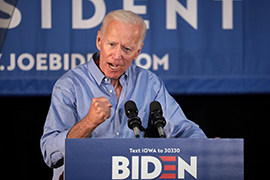 After faltering in a crowded Democratic field in early primary states, former Vice President Joe Biden – shown here in Iowa in July – has surged to front-runner status ahead of Tuesday’s presidential preference primary election in Arizona, where 67 convention delegates are at stake. (Photo by Gage Skidmore/Creative Commons) 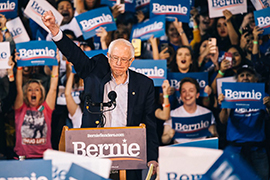 Vermont Sen. Bernie Sanders campaign has lost traction in recent Democratic presidential primaries, after surging to a lead in early states, but there was no lack of support from a boisterous crowd when he visited Veterans Memorial Coliseum in Phoenix last week. (Photo by Michael Hannan/Cronkite News)