HOUCK – Near the kitchen at St. John the Evangelist Church, Nellie Shirley greets parishioners after Mass as they gather for hot coffee, pastries and bowls of homemade menudo. Many in the room are her children, grandchildren and great-grandchildren.

Shirley, 86, has attended Roman Catholic services here all of her life, completed her sacraments here, even was married here, in 1954. When it came time to raise her own children, she made sure they grew up in the same faith she did, the faith that gave her the strength to persevere even during the most difficult times.

Native Americans in the American Southwest often reconcile Christianity with eons-old spiritual and religious Native culture. It’s rarely an easy intersection, merging generations-old colonialism by oppressors with the soothing and fulfilling nurture of religion, blending modern religious practices and traditional indigenous practices with love. For Shirley, her Catholic faith, life in a boarding school after being orphaned and building a large family steeped in the love and connection to the Navajo Nation have proven to be a lifeline.

Here, based on interviews with Shirley, is the story she tells of her birth on the reservation to her life nearly nine decades later:

Nellie Shirley was born Oct. 15, 1932, in Whiterock, New Mexico, to John and Elizabeth “Bah” Yazzie. She describes her early childhood as happy. While her father worked for the railroad, her mother stayed home and cared for Nellie and her three siblings.

She attended school at St. John the Evangelist (then named for Kateri Tekakwitha, a Mohawk woman who later was the first Native American to be canonized by the church), the only school nearby. She fondly remembers her mother taking her there every morning on horseback.

Here, she said, is when her faith first began.

Her parents weren’t rich, but the family never went without. They owned horses, sheep, fine jewelry and dishes, a shed full of tools, their own hogan, and even a new sewing machine. Whenever they went to the trading post for food and other supplies, her parents always brought Nellie candy or soda pop as a treat.

Things began to change when “Bah” Yazzie died in 1943.

Without her mother there to guide Nellie through her Kinaaldá, the traditional coming-of-age ceremony for Navajo girls, Nellie’s father arranged for female relatives to help.

Nellie’s oldest brother, Albert, was in the Army at the time. Because she and her two younger siblings were so young, they were put in the care of relatives, who took control of all money and possessions their parents had left them.

“I just figured, it’s got to be something better than being at home without parents. I expected something good to come out of being there,” Shirley remembered.

Although she loved school, had many friends and staff members were kind, she was lonely. On visiting days, no one came to see her. Worse was knowing her parents would not be waiting for her at home.

“I know what it is to miss your parents. You’re hungry, you’re lonesome, you have lice in your head, and I thought a lot, what could it be?” Shirley said. “You crave attention, and I was there for nine months; nobody came to see me.”

She found solace and comfort in her Catholic faith.

Each Sunday, nuns from St. Michael’s, the parish close to her school, would visit her. She would put on her “good clothes,” which were kept in a special storage room, and attend Mass with them. The nuns also would bring her clothes and anything else she needed, and soon were helpful in dire times.

‘The end of everything’

When she returned home from Fort Defiance, Nellie found that her relatives had taken or sold every possession her parents had left for her and her siblings. When she asked around, no one would tell her anything about what happened.

“I went to a trading post and asked, ‘Who pawned the sewing machine?’ and they told me my aunt sold it. That was the end of everything,” she said.

Finding herself without a home and with few options, Nellie was encouraged by the nuns from St. Michael’s to attend a Catholic boarding school in Laveen, a neighborhood in south Phoenix. They gathered enough money to pay for her tuition and anything she needed, and off she went to the next stage of her life.

At the school, students didn’t learn much about science or math, she said. Instead, they were taught how to weave rugs, how to crochet, how to read and “how to get along with other people.” One of her favorite things about the school was meeting people from different tribes – several who would eventually go on to become leaders in their communities.

Despite attending a Catholic school, she never lost touch with her Navajo culture, her heritage, her roots. If anything, Shirley says she feels as if her experiences only made her prouder and strengthened her values.

“It was all in me, and I loved it and respected it. I had no dislike or disappointment in it. To this day I still have my culture. We still have it.”

With help from one of the priests at the Laveen school, she received a scholarship to Northern Arizona University, where she intended to study to become a teacher.

Her plans changed when she met Tom Shirley. A bit older than she was, he was the brother of a close friend. He had attended school at Fort Wingate in New Mexico but returned to Arizona to visit his sister.

Tom and Nellie fell in love, and she followed her heart rather than go to NAU. They married in 1954 at St. John the Evangelist; they decided not to have a Navajo marriage ceremony because she had no family members she felt she could ask to sponsor them.

From the mid-1950s to the early ’60s, they had five children: Willardine, Marlene, Dolores, Perry and Carol. Aside from her duties as a mother, Shirley helped her husband run the trading post they owned near their home in Lupton.

Tom first worked as a carpenter but later went to work for the United Mine Workers of America. He was also a politician and served as councilman for the Navajo Tribe, as well as an Apache County supervisor.

Nellie Shirley finally had the family she had always yearned for as a young girl away at boarding school.

But she still had challenges.

Soon after her youngest child was born in 1966, Nellie’s younger brother, Lee Chee, was arrested after a major misunderstanding, she said.

His wife worked at a restaurant in a nearby town and had forgotten her purse one day. When he went to retrieve it for her, he was arrested and accused of stealing the purse. Because his wife was an alcoholic, the tribe took custody of their seven children and asked family members to help.

Nellie and Tom stepped in, taking in the children and raising them as their father served his sentence and their mother sought help with her addiction. Although it was a struggle caring for 12 young children, Shirley said they received financial assistance from the state and the tribe.

As Shirley watched her children grow and start families of their own, her faith was strengthened even more, as was her pride in being Navajo. Even during her most difficult times, she said she never lost sight of who she was as a Catholic or a Navajo woman. To her, faith in God and respect for his creations were universal.

Although some Catholic leaders didn’t understand Navajo teachings – “They thought we worshipped trees, mountains and statues, but they misunderstood us” – she said the church has grown more accepting of traditional ceremonies. It even allows incorporation of some aspects of Native culture into services.

“They used to consider it another religion, but you can’t help but hang onto your culture. They’re connected: We all pray to God,” she said. “We don’t pray to worship the mountains, but we respect them. They’re a footprint of God, and we are hopeful that one day we will be up there” in heaven.

Today, most of her children and grandchildren still practice Catholicism that incorporates Navajo traditions. Although they sometimes falter in their faith, Shirley said that as long as they are good people who remember where they come from, she’s fine with that.

“I think I would like my children to live in harmony and remember me, how I brought them up, and how hard their dad and I worked,” Shirley said.

Tom Shirley died in July, at age 98. Nellie said her children worry about what life will be like without their mother. She reminds them she knows what it’s like to live without parents, but with the values she and Tom instilled, they’ll be fine.

“One day Carol came and said, ‘Mom, you’re getting older. How am I going to survive?’

Vivian Meza is a former Cronkite News reporter and wrote this story for her Arizona State University honors thesis, a project posted on her website that explores the intersection of Christian and Native faith. 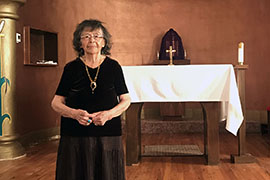 Nellie Shirley was born Oct. 15, 1932, on the Navajo Reservation. She attended Catholic school until age 13, when she was sent to boarding school after her father died. Despite the hardships she faced, Shirley says she remained strong in her faith. (Photo by Vivian Meza/Special for Cronkite News) 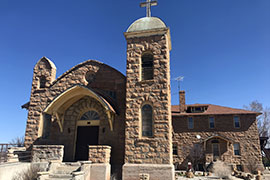 As a young girl, Nellie Shirley attended church at St. John the Evangelist, formerly named for Kateri Tekakwitha, the first Native American saint. Shirley was baptized there, went to school there and was married there. (Photo by Vivian Meza/Special for Cronkite News) 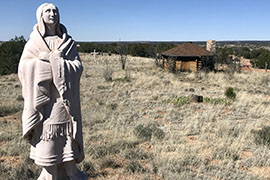 “This church respects our way of doing our ceremonies,” Nellie Shirley says. “It wasn’t like that (before). They considered it another religion, but you can’t help but hang onto your culture. They’re connected: We all pray to God.” (Photo by Vivian Meza/Special for Cronkite News)