WASHINGTON – The Trump administration said it will let tariffs on steel and aluminum imports take effect Friday, a move that critics warned could spark a “tit-for-tat trade war” with Mexico, Canada and the European Union.

Within hours of the announcement Thursday, Mexico’s Ministry of Economy vowed it “will adopt equivalent measures on a variety of products … up to an amount comparable to damage caused by the United States’ action.”

The European Commission said the move to impose tariffs of 25 percent tariff on imported steel and 10 percent on aluminum marked a “bad day for world trade.”

Those comments were echoed by Mark Fultz, vice president and general manager of Able Steel Fabricators, who called the imposition of tariffs a “lose-lose proposition for us fabricators.” The Mesa-based company has worked on projects including the spring training facility for the Arizona Diamondbacks and Colorado Rockies, and the Tempe Center for the Arts, among others.

Fultz said the construction industry will either come to a “screeching halt” when customers refuse to pay higher prices tariffs will bring, or subcontractors will be forced to eat the higher cost. He said domestic steel manufacturers already started to increase prices when tariffs were raised on imports from other countries.

But the administration said it was “unable to reach satisfactory agreements” with Mexico, Canada and the EU after months of talks. In a conference call Thursday, Commerce Secretary Wilbur Ross said President Donald Trump chose not to extend a waiver of tariffs on those countries that ran through May 31, meaning the tariffs would take effect as of 12:01 a.m. Friday.

Ross indicated that the shift was at least in part for leverage in ongoing negotiations on the North American Free Trade Agreement, among other issues. He said the U.S. is “quite willing and eager” for further discussions with its trading partners, but that it would wait for their reactions before deciding which issues to bring to the negotiating table.

He didn’t have to wait long.

“The U.S. has sought to use the threat of trade restrictions as leverage to obtain concessions from the EU,” said EU Commissioner for Trade Cecilia Malmstrom in a statement Thursday morning. “This is not the way we do business, and certainly not between longstanding partners, friends and allies.”

Mexico Foreign Secretary Luis Videgaray said his country’s position on trade, migration security and other issues “will not change because of offensive rhetoric or because of unjustified unilateral measures of this type.”

“Our positions are clear and we will continue working on all fronts to ensure that the relationship with the United States is all it should and can be,” Videgaray’s statement said. “This includes trade, where we will continue to defend open, free and rules-based trade, including the successful modernization of the Free Trade Agreement.”

But that did not stop Mexico from responding with tariffs on U.S. flat steel, tubes and pipes as well as lamps, pork, sausage, grapes, cheese and other agricultural products.

Farm officials were not immediately available for comment on the Mexican tariffs, but the U.S. Chamber of Commerce said the U.S. action was “certain to provoke widespread retaliation from abroad.”

The tariffs are sure to affect U.S. industries that rely on the materials, possibly affecting the price of everything from buildings to beer cans to aerospace parts – Arizona’s largest export, worth more than $2.1 billion in 2017, according to the U.S. Census Bureau.

Bob Pease, president and CEO of the Denver-based Brewers Association, said the change could be felt in unexpected places – like the cost of a can of beer.

“If smaller brewers have to pay more, they’ll probably pass it on to the drinker,” Pease said. “The tariffs have a stifling effect on small businesses’ ability to grow and compete. We?re puzzled and disappointed.” 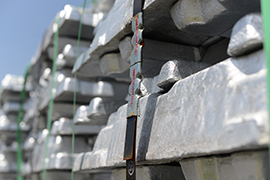 Imported aluminum ingots wait to be shipped to plants for processing in this 2013 photo from Jacksonville, Florida. The Trump administration on Friday expanded tariffs on aluminum and steel to include imports from Mexico, Canada and the European Union. (Photo by Meredith Fordham Hughes Jaxport/Creative Commons)