Taryn Martin, 21, grew up in Vail, a small town in Pima County with approximately 10,000 residents. Her family’s land stretched across the countryside. She rode horses during the day and enjoyed starry skies at night.

But at 18, Martin decided to leave her home and move to Phoenix, one of the largest cities in America.

“I moved for opportunity,” she said. “Opportunity is what brings people to the larger cities because when you’re in a smaller environment you can only go so far before you either find your purpose or you find the next step to take on that path.”

Martin’s story is a familiar one to many Arizona millennials, those born between 1981 and 2000. According to a Pew Research Center report, millennials have surpassed baby boomers as the largest living generation in the country.

In 10 years, Arizona’s millennial population has increased by 189,900, according to U.S. Census Bureau data. It now constitutes 27.2 percent of Arizona’s overall population, up from 25.6 percent in 2005. That has implications for rural areas losing a younger population and the cities that are absorbing it.

Apache and Navajo Counties both lost more than 20 percent of their millennial population from 2005 to 2015, totaling more than 1,600 former residents who no longer support the local economies.

“Millennials have more of a noticeable impact in the Phoenix area because there is a stronger sense of community focused around them and what they have to offer,” Martin said. “The city emphasizes local business, which is supported by young people, so their feedback adds to community engagement.”

Although the mom and pop shops of Vail try to cater to younger people, Martin said older locals are the biggest demographic of customers. She said Phoenix is more forward thinking because it has seen the benefits of embracing a younger generation firsthand, whereas smaller towns seemingly struggle to capitalize on or retain their millennial populations.

Malaina Spillman, the bookkeeper and events director at the Pinetop-Lakeside Chamber of Commerce, has seen the impact of losing millennials moving out of Navajo County.

“They have a big impact on our city because we’re split about 50/50 between a retirement community and a young family community,” she said. “The biggest impact millennials have had on the economy is when they go off to college and never move back home.”

Spillman said Pinetop-Lakeside misses out on a sizable portion of the young-family population in the community when millennials move away. The town is primarily driven by tourism, but it maintains a year-round population of approximately 4,000 residents.

“A lot of them still come back for vacation to visit, but not a lot move back due to the lack of industry and the overall economy here,” Spillman said.

She also said the town has tried to customize traditional tourist activities to capture as much of the millennial market as possible.

“We still have a lot of activities, but we’ve tried to gear them toward the millennials to get them to come back and be involved,” she said. “We’ve made them different and fun to appeal to more people.”

The counties that have received the most from millennial migration are Maricopa, Coconino and Pinal, which contain nine of the 10 largest cities in Arizona and two of the largest state universities.

While Pinetop-Lakeside thrives on tourism, Spillman worries that some millennials may expect the amenities and activities of a major cosmopolitan city anywhere they live.

With professional teams in every major sport, a symphony orchestra and several museums, Phoenix’s size and location allows it to provide attractions unavailable in rural areas.

Miranda Cain-Morton, the community relations manager for the Greater Phoenix Chamber of Commerce, wrote in an email that the increasing number of millennials in Arizona’s workforce is having a significant impact.

“By and large, our state has an aging population and an aging workforce, and the millennial generation is providing an infusion of not only young workers but enthusiastic and energetic workers,” she wrote in an email. “This infusion of energy and enthusiasm contributes to the revitalization of our economy and expansion of the industries that dominate the Phoenix business landscape.”

A millennial herself, Cain-Morton said the generation has been a positive force on more than just the job market in the Phoenix metropolitan area.

“In Phoenix though, we have a strong presence in our economy from the millennial generation, and that has helped propel our economy forward,” she wrote in an email. “Millennials in Arizona have, for the most part, been good for Arizona. Most millennials are eager to get involved in a community.” 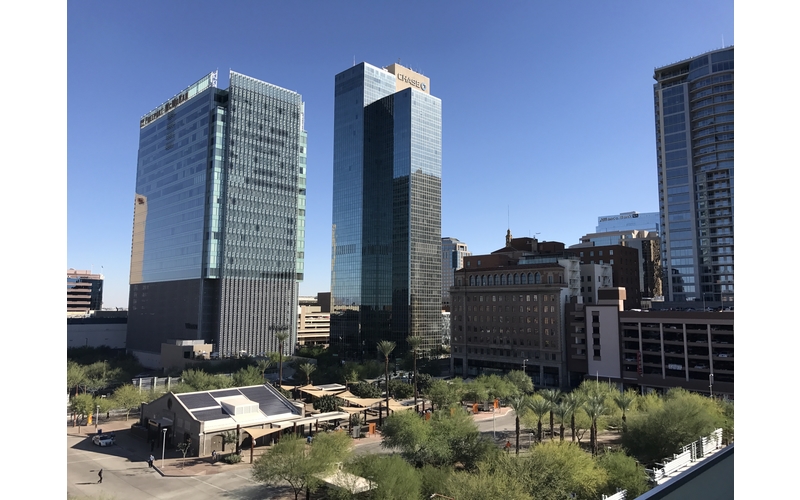 Phoenix is the sixth largest city in the United States. (Photo by Preston Scott-Hall/Cronkite News)