PHOENIX – Gov. Jan Brewer said it wasn’t easy being one of the few women in a state Legislature dominated by men back in the early 1980s.

“We women had to strive a little bit harder and be a little bit smarter and work at it on a daily basis,” she said Thursday at an event featuring three women who served as Arizona governor.

Today, according to the Arizona Women’s Political Caucus, the state Legislature ranks third in the nation in its percentage of women lawmakers. Thirty-one of the 90 state legislators are women.

Brewer attributed women’s progress in leadership roles to the work of pioneers such as Rose Mofford, Arizona’s first woman governor, who broke the glass ceilings.

“Before all of us, they started breaking that glass,” Brewer said. “And now I see that there is somewhat more of a parity that we participate in.”

Brewer joined former Govs. Jane Dee Hull and Mofford, and, by video, Janet Napolitano at a luncheon panel to discuss their roles as chief executive.

Mofford said her life changed immediately when she received a call, as secretary of state, telling her she would replace impeached Gov. Evan Mecham.

“Everything went upside down,” she said.

Hull, who became governor after Gov. Fife Symington’s criminal conviction in 1997, said the number of women currently in the Legislature as well as during her tenure as governor shows that women are gaining and doing well in leadership positions.

“I am very proud of how Arizona’s women have succeeded,” Hull said.

The event was co-sponsored by Arizona State University’s Alumni Association and az magazine, which honored Mofford as its 2011 Woman of the Year.

Luncheon moderator Christine Wilkinson, senior vice president and secretary of ASU, said each of the former governors shows that leadership doesn’t depend on gender, though there are still many areas where women and minorities haven’t been able to attain leadership positions.

“It’s important to strive for that and assist one another in helping doors and encouraging others,” Wilkinson said. 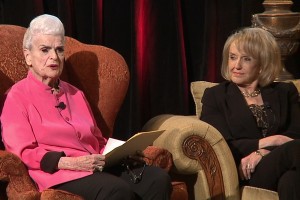