TUCSON – A program linking the efforts of federal agencies with local law enforcement and Mexican officials has increased arrests and drug seizures along the border over the past year and a half, the U.S. Customs and Border Protection commissioner said Tuesday.

“This is about teamwork, this is about providing an unprecedented determination and energy and resource base to restore the rule of law to the Sonora-Arizona corridor,” Alan Bersin said at a news conference held at Davis-Monthan Air Force Base.

More than 60 federal, state, local and tribal agencies are participating in the effort, dubbed the Alliance to Combat Transnational Threats.

Part of a U.S. Department of Homeland Security initiative to secure the border, the program was launched in September 2009 by U.S. Customs and Border Protection, U.S. Immigration and Customs Enforcement, the U.S. Department of Justice and the U.S. Attorney’s Office.

Bersin said it wasn’t publicized until now because officials wanted the program to prove itself.

“It was the preference of law enforcement leaders at the federal, state, local and tribal levels that we let our deeds speak,” he said.

Cooperation with Mexican law enforcement has included embedding Mexican agents in U.S. Immigration and Customs Enforcement for training and communication.

It also means sharing with Mexican officials surveillance gathered by U.S. law enforcement, such as footage that led to the seizure of a catapult being used to fling drug packages over the border near Naco.

Meanwhile, cooperation among federal, state, local and tribal officials was key in two efforts that led to the seizure of nearly two tons of marijuana and nearly 700 arrests in Pinal County last year.

Officials said the program has let agencies share information and coordinate operations and brought more agents, vehicles and funding to the border.

“These results would not have been possible if each agency had worked alone,” Hill said. “Communication amongst these agencies is critical to our success.”

Matthew Allen, an Immigration and Customs Enforcement special agent, said the effort extends deep into both the United States and Mexico.

“You cannot disconnect what happens on the U.S.-Mexico border from what happens in Tucson, Phoenix and Flagstaff,” Allen said.

Bersin said the ultimate goal is creating a level of deterrence against smugglers and traffickers on both sides of the border. Arrests and seizures should start declining as word spreads about the effectiveness of the program, he said.

“You will see the difference,” Bersin said. 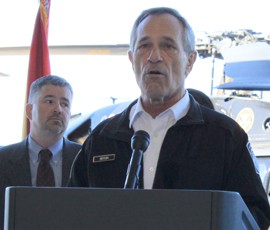