MESA – When Mesa Police Officer James Boubelik pulls someone over for reckless driving, he looks for clues of impairment like dilated pupils, slurred speech or the smell of alcohol.

But it’s more than just alcohol and illegal drugs that Boubelik and other officers are looking for these days. They’re also looking for drivers impaired by legal, prescription drugs – harder to recognize than drunken driving and sometimes harder to prosecute.

“At first they don’t want to tell you anything” about prescription drugs they may be taking, Boubelik said. “Then as you start seeing these different signs and symptoms they’ll start opening up to you sometimes.”

Abuse and misuse of prescription drugs is a growing problem and one that authorities are targeting through increased public awareness and training that certifies police as drug recognition experts, said Alberto Gutier, director of the Arizona Governor’s Office of Highway Safety.

Mesa Prosecuting Attorney William Burke said used to handle just a few cases a year of people driving while impaired by prescription drugs, but now they make up anywhere from 10 to 25 percent of the cases he handles.

Burke says that as prescription drugs get stronger, they can cause driving impairment even for people who are not deliberately misusing them.

“They have multiple prescriptions, and they’re just not aware that if it’s impairing them, they shouldn’t be operating a motor vehicle, even though it says that on the medication,” Burke said. “Yes, it is definitely increasing.”

So are arrests, which Burke attributes to better police work. That’s where training for DRE – drug recognitions experts – comes in.

Phoenix has become a hub for DRE training, where lab technicians teach officers from around the country and as far away as Canada how to recognize the signs of different drugs: Depressants, for example, make pupils smaller while stimulants make them larger.

The program was designed by the International Association of Chiefs of Police and is run through the National Highway Traffic Safety Administration. Officers must be recertified every few years to stay current on the latest trends and techniques.

If detecting prescription drug abuse is complicated, so is prosecution.

Burke said that in one recent case, the jury couldn’t decide if a driver taking three different prescriptions could be convicted of driving under the influence because his prescriptions were legal.

But the danger is real whether the substance is legal or not – this driver had swerved into oncoming traffic, nearly causing head-on collisions with two different vehicles before running off the road and crashing through a nearby house.

And though nobody was hurt in that accident, bystanders aren’t always so lucky.

On Oct. 29, authorities said a Peoria teen was struck and killed by a Phoenix woman driving down the sidewalk at 42 mph. The woman said medication made her “incoherent,” according to a report in The Arizona Republic.

Mesa Police Cmdr. William Peters said that the impact of accidents on victims and their families “motivates us more than anything.”

“We know if we get that guy hopefully we’ve prevented a crime of violence, and hopefully, by us arresting that person, that person changes his life around,” Peters said.

Peters said he believes accidents like the one in Peoria might not happen if people communicate with their doctors about medications and think ahead.

“It’s a purely preventable crime, it’s a crime of violence that never should have occurred,” Peters said. “The very first thing that goes when you take these things (drugs) is your judgment, people aren’t thinking right.”

That’s why Boubelik said he thinks educating the public about the dangers involved in driving while impaired, whether by alcohol or by prescription drugs, will play a large part in reducing such accidents. He said he wishes drivers could be shown accident photos before they get behind the wheel impaired – whether by prescription drugs or any other substance.

“Those images stay with you,” he said. “That’s what makes me so adamant about enforcement and education — nobody understands if they haven’t seen it, there’s no words to describe it.”

And people don’t usually drive impaired just once: Police say that, on average, a first-time offender has driven under the influence 87 times before getting stopped and arrested. This may mean repeat offenders think nothing will ever happen.

“It’s a numbers game, it’s a matter of numbers,” Boubelik said. “The numbers are going to get you, and it’s only a matter of time before something tragic happens.” 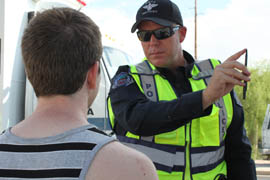 A Mesa police officer tests eye movements of a driver pulled over during a September 2010 DUI checkpoint. Officers and city officials say that prescription drug use is a rising cause of driver impairment in Arizona, and they’re increasing drug recognition training to identify drivers affected by substances other than alcohol.
Rebekah Zemansky