Town officials want to make sure it survives Arizona’s new law allowing the sale of sparklers and certain other fireworks.

Payson is one of the first cities in the state to enact a local ordinance banning the use of fireworks that will become legal statewide on Dec. 1.

“We have conditions at different times of the year that can literally make the area around us a tinderbox,” said Payson Mayor Kenny Evans. “We wanted to make sure that people understood our anxiety about turning people loose with incendiary devices and fireworks.”

Fireworks allowed under the law include sparklers, cylindrical and cone and fountains, illuminating torches, wheels and spinners and toy smoke devices. Buyers must be at least 16.

In approving the measure, however, state lawmakers allowed local governments to prohibit the use – but not the sale – of those fireworks.

Yuma is among cities taking a wait-and-see approach.

“Staff members are collecting information about the potential impact,” said Dave Nash, a Yuma city spokesman. “As of now, there’s just too many unknowns. We don’t have what the demand for it is going to be, we don’t know what usage is going to be, what kinds of hazards might present themselves. And we don’t know how much education the public may need on what’s allowable and what isn’t.”

Explosive devices like cherry bombs will still be illegal, as will bottle rockets and anything else that leaves the ground.

Every year, 10 million of acres of forest in the West burn in fires caused by matches, campfires, arson – and fireworks. That’s a concern in Payson, which sits on the edge of the largest ponderosa forest in the world.

“When you get to forested areas and areas that are tinder dry during some times of the year, prudence needs to be the call word,” Evans said. “How we communicate that to people is going to be very, very difficult because what the legislation did.” 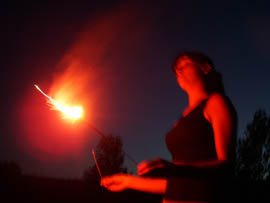 As of Dec. 1, a state law will make sales of sparklers and certain other fireworks legal to those 16 and older. Some communities are adopting ordinances banning the sale of the devices, which is allowed under the law. (Cronkite News Service Photo by Rebekah Zemansky) 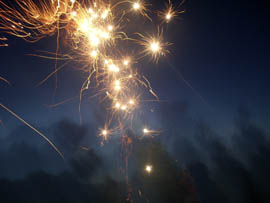 Other fireworks allowed under the law include cylindrical and cone and fountains, illuminating torches, wheels and spinners and toy smoke devices. (Cronkite News Service Photo by Rebekah Zemansky)