TEMPE – As a traffic bureau sergeant, Dale Hoobler has looked into plenty of accidents. But this crash, even though the victim survived, was especially troubling because the injury was so preventable.

A woman returning home from errands put her 2-year-old son in her pickup’s front seat wearing only a lap belt. As she made a left turn, she lost control and hit a tree at 40 mph.

The toddler flew out of his seat, hitting his head on the center console and sustaining a deep gash.

“You need to protect the kid,” Hoobler said.

With national Child Passenger Safety Week coming Sept. 19-25, Hoobler and others are urging Arizona parents to take steps to protect children in vehicles. In some cases, that means doing more than the law requires.

“It’s your kid; you’re responsible for them until they’re 18 years old,” Hoobler said. “They can’t make decisions for themselves at younger ages, so we need to do that for them.”

Arizona law requires children under 5 to be in safety seats. Older, larger children must be in seat belts, but the state doesn’t require booster seats.

The National Transportation Safety Board recommends that children ages 4 to 7 be in a toddler seat or booster seat and to adjust the fit of seat belts designed for adults, but efforts to add that requirement in Arizona have failed in the state Legislature in recent years.

With the most recent numbers for 2006 showing Arizona ranking fourth in the country for child passenger fatalities, Donati hopes events like Child Passenger Safety Week will help get the word out to parents about what they can do to protect their kids.

“I think that a lot of people just don’t know that the resources are out there,” Donati said.

Alberto Gutier, director of the Arizona Governor’s Office of Highway Safety, said that parents should make safety a habit for kids and for themselves.

Besides Child Passenger Safety Week, Gutier said parents who want more information can check with local law enforcement throughout the year for scheduled classes and inspections.

They can also come to Public Safety Day at the Arizona State Fair, from Oct. 23-24. It will offer events designed to get the whole family involved.

Gutier said his grandchildren have taught him that kids can be an important part of safety training too.

He said he once was pulling out of his garage when his young grandson, who was properly buckled, chanted, “Die, die, die!” from the back seat.

Gutier hadn’t yet fastened his own seat belt, intending to do so once the car reached the driveway.

Gray, who sponsored a bill to requiring booster seats last session, said parents have told her they can’t stand the sound of their child crying because they want out of the safety seat.

“If they’re in an accident, their child may be killed and they will never hear the cry of their child again,” Gray said. 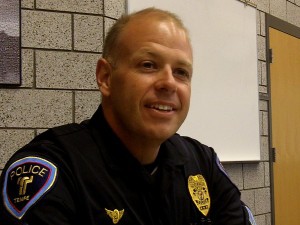 Sgt. Dale Hoobler, who deals with traffic safety for the Tempe Police Department, says drivers need to think about the safety of child passengers all the way through age 18. With a national week devoted to child passenger safety coming, Hoobler and others are urging Arizonans to focus on matters such as proper use of booster seats. (Cronkite News Service Photo by Rebekah Zemansky) 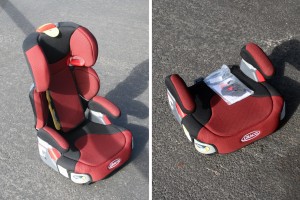 A booster seat is designed to position seat belts properly on children up to ages 10. This model can convert to having no back as a child grows. The National Transportation Safety Board has recommended that states require booster seats for children younger than 9 years old and and shorter than 4-foot-9, but efforts to make that law in Arizona have failed. (Cronkite News Service Photo by Daniel Newhauser)