PHOENIX (Wednesday, Sept. 30) _ No journalist will be trusted as much as Walter Cronkite or have the influence Cronkite wielded when he told viewers that the U.S. should negotiate an end to the Vietnam War, PBS newsman Jim Lehrer said Wednesday.

“Everyone was watching the news, and that was a shared American experience,” Lehrer, anchor of “NewsHour,” said during a panel discussion on Cronkite’s legacy. “Today, there is no shared news experience, no one place you can go and say anything and have that kind of impact.”

Lehrer said Cronkite’s harsh assessment of Vietnam worked because it was the only time he offered an opinion as anchor.

“The thing that people forget and the reason it meant so much is that he went right back to doing his reporting,” he said.

Woodward praised Cronkite’s decision to devote long segments of two newscasts shortly before the 1972 presidential election to the Post’s investigation of the Watergate break-in and the possibility of a White House cover-up. At the time, he said, other media organizations hadn’t paid much attention to the reports by Woodward and Carl Bernstein.

“There have been a lot of gutsy things done in journalism and television journalism, and I don’t know if anything beats that,” Woodward said.

Lehrer attributed Cronkite’s ability to influence public opinion on Watergate, Vietnam and other matters to his credibility.

“If you don’t have the trust of the people you’re writing for or reporting for or talking to, it’s all going to be pointless,” he said.

Shaw, who worked for Cronkite at CBS, said his former boss was very involved as managing editor.

“You always prided yourself in not encountering Walter’s questions,” Shaw said. “But if you did encounter his questions, you worked mightily to make corrections.”

Former CNN anchor Aaron Brown, now ASU’s Walter Cronkite Professor of Journalism, served as moderator of the event, held in the Cronkite School’s First Amendment Forum. Afterward, Brown said that Cronkite will continue to be more than just a namesake.

“Every one of us who teaches here carries with us, I think, the knowledge that if you teach at the Cronkite School you have a responsibility,” Brown said. “We have a standard, a clear standard: Walter’s career.”

Cronkite gave his name to the school in 1984, and his involvement extended beyond distant mentorship. Dean Christopher Callahan said Cronkite was engaged and approachable during annual visits.

“Any time you saw Walter and a group of Cronkite students together, it was more than just reverence,” Callahan said. “It was truly affection, on both sides.” 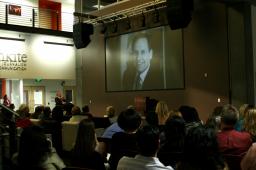 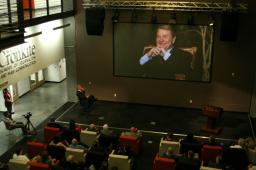 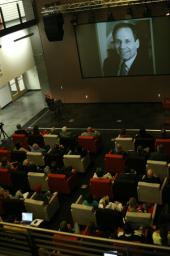