WASHINGTON – The Department of Homeland Security said Tuesday that it will stop raiding workplaces to search for undocumented immigrants and will focus instead on “unscrupulous employers who exploit the vulnerability” of undocumented labor.

The announcement reverses a Trump-era policy of workplace raids by Immigration and Customs Enforcement agents that led to the arrest of more than 1,800 undocumented workers, one advocacy group said.

DHS Secretary Alejandro Mayorkas said Tuesday that those sweeping raids missed “the most pernicious aspect of our country’s unauthorized employment challenge: exploitative employers.” In addition to halting such raids, he said the agency would look for ways to encourage undocumented workers to come forward and report workplace violations.

Advocates welcomed the end to the raids, but said they were more hopeful that the change would make employers “play by the book.”

“This will shift accountability to the unscrupulous employers that exploit the vulnerability of undocumented workers,” said Marielena Hincapié, executive director of the National Immigration Law Center. “They are the ones truly responsible for depressing working conditions and wages in our country.”

It was Hincapié’s center that estimated that worksite raids under former President Donald Trump swept up more than 1,800 undocumented workers, including more than 600 who were arrested in August 2019 raids at poultry plants across central Mississippi, the largest such effort in U.S. history.

“These highly visible operations misallocated enforcement resources while chilling, and even serving as a tool of retaliation for, worker cooperation in workplace standards investigations,” he said in the memorandum announcing the change in policy.

The memo said such raids would stop immediately and it directed agency officials to consider Labor Department requests to defer prosecution of undocumented immigrants who are working with Labor in “ongoing workplace standards investigations.”

It also ordered proposals within the next 60 days for revamping current policies that “may impede non-citizen workers, including victims of forced labor, from asserting their workplace rights.”

Under federal law, employers are supposed to verify the identity and immigration status of each of their workers. Businesses that violate the law can face fines, civil penalties and even criminal charges.

Arizona state law requires that employers use E-Verify, a federal web-based system that lets businesses check the immigration status of prospective employees, before hiring someone. For that reason, the problem of businesses hiring undocumented workers “is a more pronounced issue in other states” than in Arizona, said Garrick Taylor, spokesperson for the Arizona Chamber of Commerce.

But that does not mean that businesses in the state are not looking for ways to take advantage of immigrant workers, whether documented or not, Hincapié said. She pointed to industries such as construction and roofing, where she said employers may misclassify workers as independent contractors to avoid paying workers’ compensation, unemployment or other state requirements.

Rebecca Shi, executive director for the American Business Immigration Coalition, said undocumented workers will keep coming as long as they are “doing the jobs American workers prefer not to do.”

The Bureau of Labor Statistics reported that there were 10.4 million job openings nationwide in August, 2.4 million of which were in the West, almost twice as many as in August 2020. These numbers point to an “acute labor shortage that does not align with the positions Americans are willing to apply for,” Shi said.

Strater said that while exact numbers are hard to come by, “we do know that more than half of farmworkers in the United States are undocumented.” She said their immigration status increases their vulnerability to workplace exploitation, as with undocumented workers in other industries.

She welcomed the move away from “some real cruel policy” under the Trump administration, and hoped the new policy announced by Mayorkas will make immigrant workers less vulnerable to abuse.

That was echoed by Hincapié, who said the new policies should make employers “play by the book,” and result in improved working conditions in the long run. This will “level the playing field and take away the unfair economic advantage that abusive employers have right now,” she said.

Shi said Mayorkas’ order will help toward “closing a gushing wound,” what she called the outdated and broken system that allows employers to exploit immigrant workers. While Tuesday’s order is a good step to make sure raids do not “exacerbate the current labor shortage,” she does not believe it is the actual solution.

“The real solution is federal immigration reform,” she said.

“Our immigration system has been broken for over 35 years,” Shi said. “It is time that Congress does its job and updates this outdated, untouched system.” 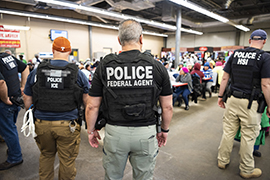 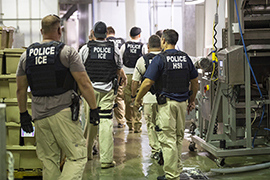