WASHINGTON – To the Tohono O’odham chairman, it’s schools and health care. To the Hopi chairman, it’s badly needed jail improvements. Those were among the laundry list of needs outlined at a hearing Thursday on federal facilities in Indian Country.

“To say that the Hopi people are frustrated is a major understatement,” Hopi Chairman Timothy Nuvangyaoma said of federal promises to fix the tribe’s only detention center. “Nearly four years later, there is no broken ground, only broken promises.”

No one at the House Natural Resources subcommittee hearing challenged the needs, on everything from roads to broadband, that could cost billions of dollars, a funding shortfall that one lawmaker called “a travesty.”

But while committee Republicans acknowledged the “significant needs” in Indian Country, they accused Democrats of using the hearing to sell President Joe Biden’s $2 trillion American Jobs Plan. Instead of proposing policy changes that would fix the underlying problems, a GOP staff memo said the plan “relies on Democrats’ default worldview that simply increased funding for federal programs serving Indian tribes will provide prosperity to the Indian communities.”

“Without regulatory and programmatic reforms, there is no way to ensure increased funding goes to where it’s needed most and won’t instead be lost to an expanded bureaucracy,” the memo said.

But Democrats like Rep. Teresa Leger Fernandez, D-N.M., said the funds are “needed to rebuild the nation’s failing infrastructure.” Others said the government needs to live up to its obligations.

“Investment in education, healthcare, and the wellbeing of those in Indian country are long overdue,” said Rep. Raul Grijalva, D-Tucson.

Tribal leaders were not the only ones who said more funding is needed.

Jason Freihage, a deputy assistant Interior secretary, testified that tribal schools alone face a $823.3 million maintenance backlog. But Freihage said that of “86 schools in poor status, 73 do not currently have funding for major replacement or repair projects.”

He went on to outline hundreds of millions in road, water, public safety, broadband and economic development projects that are needed to “improve infrastructure in Indian Country.”

The need is no less pressing when it comes to health facilities, said Randy Grinnell, deputy director for management operations for the Indian Health Service. He cited a 2016 report that said tribes needed a total of $14.5 billion in health facility projects – an update of that report this year could show the need is now at an estimated $22 billion.

Tohono O’odham Nation Chairman Ned Norris Jr. said the tribe’s hospital in Sells is more than 50 years old, has limited bed space and can only provide basic services. He said it needs $225 million in repairs and has been on an IHS “funding priority list for over 20 years.” But while the government has started funding the project, the earliest it can be completed is 2024.

“The nation’s members have waited for more than 25 years for a decent, accessible healthcare facility – and they are still waiting,” Norris said.

The tribe’s Santa Rosa Day school also has long-standing problems that have been met with a slow response from the Bureau of Indian Education, he said.

“The BIE reports planning for the Santa Rosa Project is now complete and will begin this year with estimated completion in June 2023,” Norris said. “While we appreciate that there has been progress made, the fact that our children attended school for years in an unsafe and unhealthy facility is unacceptable.”

Other tribal leaders at the hearing – which also included representatives of the Muscogee, Winnebago and Couer d’Alene tribes – shared similar stories. Nuvangyaoma said the Hopi have been waiting years for infrastructure improvements, which are constantly delayed.

“In response to all these actions, all we ever received were excuses” from federal agencies, he said. “We are tired of the excuses; we need the Hopi Detention Center constructed and operational.”

The center was in such poor shape that it was ordered closed in 2017 by the Bureau of Indian Affairs, which Nuvangyaoma said has “emboldened criminals.”

Like the Tohono O’odham and other tribes, the Hopi have several schools that are in poor condition. Nuvangyaoma said Keams Canyon Elementary School, for example, has “major health and safety concerns, including: cracked walls, a leaking roof, and retention walls that need major repairs.”

“The KCES has been on the BIA’s school replacement priority list since 2004,” he said.

While committee members sparred over the American Jobs Plan, tribal leaders focused more on the need and less on where the money comes from.

“Our situation illustrates the dismal condition of federally-funded facilities in Indian Country, and the critical importance of investing in these facilities in the American Jobs Plan, or any other infrastructure package,” Norris said. 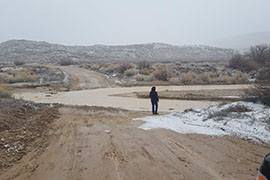 Roads are one of the biggest infrastructure needs in Indian Country, like this unpaved Navajo Nation road that washed out in 2019. But tribal leaders say the need includes everything from schools to water systems, from hospitals to broadband. (Photo courtesy Navajo County Public Works Department) 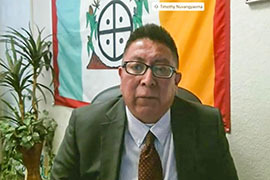 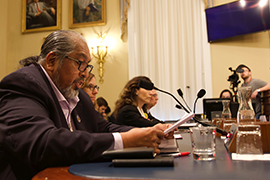