EDS: Due to an editing error, a previous version of this story incorrectly stated Phoenix’s population gains relative to other cities. The error occurred in the headline and third graf. The story here has been corrected, but clients who used earlier versions are asked to run the correction found here.

PHOENIX – The city of Buckeye got bumped from the top spot for population growth rate in 2019, but its 56.6% population increase since 2010 was still enough to make it the second-fastest growing city in the nation for the decade.

New city and town population estimates released Thursday by the Census Bureau show Buckeye’s population grew to 79,620 in 2019, a 7.1% increase in just one year and a sizable leap from the 50,851 people who lived in the city in 2010.

The Census numbers also showed Phoenix maintaining its perch as the city with the largest number of new residents in 2019, keeping it in fifth place for overall population behind New York, Los Angeles, Chicago and Houston.

Phoenix’s growth over the decade also allowed it to keep the title as the city with the largest numeric increase in America from 2010 to 2019. The city’s population grew by 234,301 residents over the decade – 26,317 in the last year alone – bringing its total estimated population to about 1.68 million.

Buckeye officials said they were not surprised by the continued strong growth of their city, which they attributed to available land and economic opportunity.

As the westernmost suburb of Phoenix, Buckeye is the one major Arizona city between Phoenix and Los Angeles. Besides being a major stop for goods and people traveling between the two metropolises, its location has also made Buckeye an attractive place for California companies looking to relocate, said David Roderique, Buckeye’s economic development director.

“They can’t take the congestion and the cost of regulation and all the problems that California is having, so Buckeye benefits from that,” Roderique said.

Another advantage is Buckeye’s size, sprawling across 640 square miles of largely undeveloped land. Officials said that only 5% of the land inside the city limits is developed. That makes the city a draw for people looking for affordable housing and planned communities, said Annie DeChance, the city’s communications director.

Fast growth can bring challenges, including the need to keep up with demands on school enrollment in a place where DeChance said education is “a critical component for the growth of the city.”

“The year that I got here, they opened up a new school – Marionneaux Elementary. It was relieving another school in the district, which was already at capacity,” Lee said. But the fact that the district had already planned for that growth showed its planning works, he said.

“The new school was ready to get on board and relieve it, so we haven’t had any dramatic overcrowding,” Lee said.

He said the district is on track to open John S. McCain III Elementary for the 2021-2022 school year, and just announced plans for one more school a few years after McCain opens, all part of the plan to keep everything “measured.”

Buckeye and Phoenix were not the only Arizona cities to post large numbers in the Census report.

Goodyear, another West Valley suburb, posted the 16th-fastest growth rate from 2018 to 2019, adding 3,967 residents for a 4.8% growth in the year. Goodyear also ranked 14th for growth over the decade, with a total 33.1% growth over the nine years.

In terms of one-year growth, Maricopa City’s 4.2% growth rate ranked it 17th, right behind Goodyear. Other Arizona cities in the top 50 were Surprise in 43rd place and Casa Grande in 45th, with one-year growth rates of 2.9% and 2.8%, respectively. 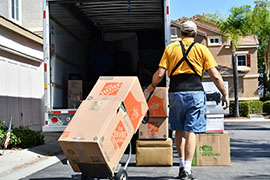 The cities of Buckeye and Phoenix capped a decade of strong population growth in 2019, according to a new Census Bureau report. It showed Buckeye had the nation’s second-fastest growth rate from 2010-2019 while Phoenix gained the largest number of residents in that time. (Photo by HireAHelper/Creative Commons)