PHOENIX – New unemployment claims rose to almost 3.3 million last week, an increase of 3 million over the previous week and the highest on record, according to numbers released Thursday by the Labor Department.

And economists say this could just be the beginning of a jobs spiral, as coronavirus closures and cancellations slam the economy.

“It’s as if we’ve got a light switch going off throughout significant segments of the economy,” said Dennis Hoffman, director of the L. William Seidman Research Institute at Arizona State University’s W.P. Carey School of Business. “But it’s not the result of some unknown driving force in the economy.”

The driving force is COVID-19, the pandemic that has put parts of the globe on lockdown, canceling events, shuttering businesses and sparking mass layoffs.

The national numbers were reflected in Arizona, which reported an eightfold increase in unemployment claims last week. The Arizona Department of Economic Security said it received 29,268 applications, compared to about 3,500 in a typical week.

A spokesperson said Thursday that the department is in the process of hiring 80 more people to handle calls – a 400% increase in staffing – to help handle the influx of applications. It is also approving overtime and taking more unemployment applications by phone.

“We are also continually hiring and increasing staff capacity,” Brett Bezio, the spokesperson, said in an email. “In addition, we are making system enhancements to simplify the application process as much as possible during this time.

“DES is doing everything possible to get Arizonans benefits as soon as possible,” Bezio said.

DES is not the only outfit that is hiring, despite the uncertain economic outlook. Businesses, especially essential businesses, are eager to fill part-time and full-time positions.

Arizona-based supermarket chain Bashas’ said online that it needs workers and “if you’re experiencing cut back hours or closure of your work space, reach out to your local Bashas’.”

“We would love to help bridge the gap for you right now and get you to work,” it said in an Instagram post.

Unemployment is a key element in the $2 trillion economic stimulus working its way through Congress this week. The measure, passed unanimously by the Senate Wednesday and scheduled for a House vote Friday, includes federal funding to increase state unemployment benefits by $600 per week for up to four months, in addition to direct payments of $1,200 for most taxpayers.

Economists like Olugbenga Ajilore said the stimulus funds will help, but even that may not be enough.

“Any combination of unemployment insurance expansion is going to be helpful, but I don’t think it’s enough to help out local economy,” said Ajilore, a senior economist with the Center for American Progress.

He said the money, especially for small businesses, will be most beneficial if checks are sent out “in a timely fashion,” because waiting an extra two or three weeks could be too long.

Hoffman agrees the $2 trillion bill now before the House “will do a lot.”

“I think it’s necessary, and it will provide incomes to individuals that have lost their jobs and that is the first and foremost place that we need to provide aid,” he said.

Hoffman is more concerned that a demand for more public welfare services will put pressure on state and local governments that will “leave lingering negative repercussions.”

But while the numbers “look really bad,” Hoffman said we at least know what’s driving them – the virus itself and the panic around that has driven the economy to shut down in an unprecedented way.

Hoffman said the U.S. could expect numbers “as bad as this or probably far worse” in the next few weeks or even months. But he also said it’s not impossible for the economy to come “back roaring, perhaps with a vengeance” within the next year or so after COVID-19.

Ajilore thinks it’s almost impossible to predict the future of the economy until this public health crisis is over. As people adapt to shelter-in-place lifestyles, he said, there is a behavioral change that could be long-term, resulting in a slower, more gradual recovery. But it’s hard to say.

“Once we solve the health crisis, I think we could then start talking about what’s going to happen with the economy,” Ajilore said. 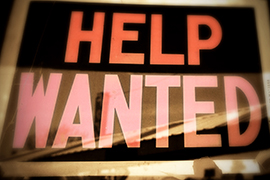 Unemployment was at historic lows just weeks ago, but that has started to turn around as the coronavirus is felt in the economy. The Labor Department said 3.3 million people filed jobless claims last week, a record high and 3 million more than week before. Arizona has also seen claims skyrocket. (Photo by Alachua County/Creative Commons)