PHOENIX – Undocumented immigration from Mexico has dropped so significantly over a decade that Mexicans no longer make up the majority of those living in the U.S. illegally, according to a Pew Research Center report.

Mexicans make up less than half the total undocumented immigrant population for the first time in more than half a century, the report says.

Arizona is among more than a dozen states showing a decline, with 220,000 fewer undocumented immigrants in 2017 than 2007.

More undocumented people are leaving the U.S. than staying, the report says.

“The first time that I went to Mexico, I was probably around 23, I self-deported,” said Jesus Barrón Quezada, an undocumented immigrant who grew up in Mesa from the age of 4. The now 33-year-old returned several times to the U.S. but now lives in Mexico.

The number of undocumented immigrants from Central America and Asia ticked upward, with 400,000 and 130,000 respectively.

Recently, President Donald Trump threatened to impose a 5% tariff on Mexican goods to deal with what he called a “sustained influx of illegal aliens,” ultimately backing off the threat after a reported agreement was made with Mexico.

According to the Pew research, undocumented immigrants in the U.S. labor force declined to 7.6 million in 2017, down from 8.2 million in 2007.

Earlier Pew data show that, in 2016, undocumented immigrants made up 5.7% of the workforce in Arizona, nearly 1% higher than the national average.

“These shifts in population in terms of undocumented immigrants and folks coming over, it’s more related to the economic stability in their own countries,” said Tomas Robles, co-executive director of Living United for Change in Arizona, a group advocating for social, racial and economic justice. “It’s not because of anything in the (Trump) administration is doing.”

Robles attributes the decline of undocumented immigants to lower birthrates in Mexico along with increased living standards.

“Because the economy’s been growing slightly since that time, you’re seeing more Mexican nationals being able to afford to live and sustain themselves better in Mexico,” he said. “You still see farmers and other people migrate, but at a much lower rate.”

Pew research shows adult undocumented migrants had lived, on average, 15 years in the U.S, the longest stay since 1995.

But deportations may also play a role in the decline, Robles said.

“There were a lot of undocumented immigrants here that were sent back,” he said. “Because they’ve gained skills either in English or other types of skills here, they’ve been able to better transition into Mexican life.”

For Quezada, who considers Mesa his first home, the transition took many years.

“I didn’t want to face the fact that I was going to get deported eventually, just knowing the fact of the political climate in Arizona,” Quesada said.

Still, the return to Mexico was a shock.

“As far as family in Mexico, it’s just … cousins that I don’t know, the majority of my family is in the states working,” he said. “It was just meeting strangers that were supposedly my family.”

“It was worth coming back, trying again,” he said. “Putting a risk on myself to get deported to for the second time. And yes, thankfully, I was able to cross and be home with my family.”

Eventually, though, an earlier DUI caught up to him when he was pulled over for a traffic violation. Quezada said he was arrested, spent four months in custody, and then was deported.

“It lasted another five, six months,Quezada said. “I was homesick and missed my family.”

Quezada made it to the U.S. again and was more cautious. He was here for a few years, met his now wife and she got pregnant. But with a new family, he wanted to settle his warrant for failing to attend his DUI classes, Quezada said.

“I did everything. I went to the class, I took the class, I paid for the class,” Quezada said. “I showed up in front of the judge and show them all my documents … and I guess he wasn’t having it.”

Quezada said he’s now happy in Mexico with his wife and children.

“It’s just insane for me to think about, for me growing up pledging allegiance to this flag every day, from five years to 18 years,” Quezada said. “All of a sudden that one day he hits the gavel on a piece of wood and you realize that all that is gone.”

Quezada is hopeful the future will be better for some.

“These Dreamers, it’s just incredible what they’ve been doing with these people’s lives,” he said. “I have a sister, that’s a Dreamer, a cousin that’s a Dreamer, and they contacting you about ‘How’s life Mexico?’ Because they don’t know Mexico.” 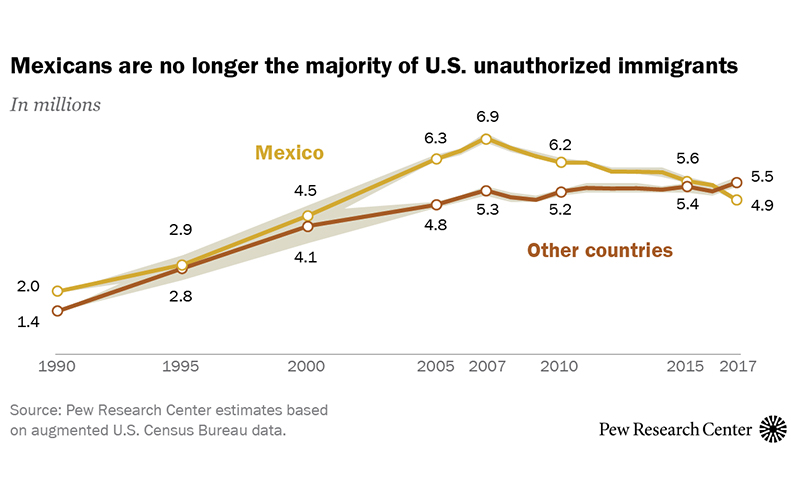