NATIONAL HARBOR, Md. – Scottsdale seventh-grade student Max Greenspan on Tuesday became just the sixth competitor in the 92-year history of the Scripps National Spelling Bee to successfully challenge the judges and be reinstated to the contest.

But his victory was fleeting. Max and six of the other eight Arizona schoolkids competing in the bee did not make it out of the third round Tuesday. That left just one student from the state – Tsehootsooi Middle School eighth-grader Kelly Haven – eligible for Thursday’s finals, but she did not make the cut Wednesday to advance as one of the final 50 spellers.

Max and Kelly both were repeat competitors at the bee, like two others from Arizona and a total of 162 of the 562 elementary and middle school students from across the country and the world who were competing in this year’s bee.

For Annabelle Tran, a Frontier Elementary School eighth-grader from Peoria who tied for 453rd place in last year’s competition, just making it into the third round was a relief.

“I was really excited when I got my word right because last year, I didn’t,” Annabelle said Tuesday morning, after correctly spelling Bascology – the study of Basque language and culture.

But, like so many others from Arizona, she would be tripped up in the third round. For her, it was a misspelling of the word “eminence.”

Max, the 13-year-old from Cocopah Middle School, had to battle his way into the third round after judges buzzed him off stage while he was spelling “mot juste” – a French-derived expression for the exact, appropriate word.

A clearly shaken Max said later that he did not understand why he was buzzed off stage when he still had well over a minute on the clock to finish spelling the word.

“I was only one letter away from spelling it correctly,” he said. “I get two minutes to spell the full word!”

Some in the audience tweeted about the judges’ quick hook, and Max’s mother, Julie Greenspan, said she was in shock because she knew her son knew the word and was just thinking about the last letter. As soon as she approached him on the sofa, where disqualified contestants go, he told her he hadn’t finished spelling the word.

They filed a complaint and Max was soon reinstated. But there was no question that he was disqualified after misspelling “pseudologist” – a term for a liar – in the third round.

“He had a great experience regardless of what happened and, if invited back, would absolutely come back,” Julie Greenspan said in a text message after Tuesday’s competition. “It’s an opportunity he wouldn’t want to miss.”

Despite the stress of the competition, most of the spellers and their families appeared to be taking things in stride.

The Greenspans plan to use their now-free time to visit museums in Washington, Julie said, while first-time national contestant Tanish Doshi, a sixth-grader at Richard B. Wilson K-8 School in Oro Valley, said the bee was better and more fun than he had expected.

Tanish – also eliminated in the third round, for misspelling “kalamata,” a type of olive – said that to him, the other participants were his friends and the real rival is the dictionary.

“At the end of the day, it’s a triumph for everyone,” Tanish said. “Because you beat the dictionary.”

The bee concludes Thursday, when the final 50 spellers will compete for prizes that include a top monetary award of $50,000. 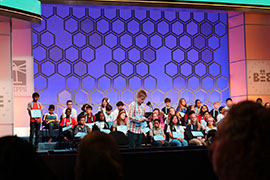 Spellers have two minutes in front of a live audience – and an audience watching on television – to correctly spell a word, or hear the dreaded ding of a bell that lets them know they misspelled it. (Photo by Miranda Faulkner/Cronkite News) 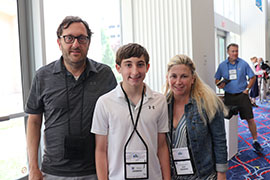 Scottsdale seventh-grader Max Greenspan, with his parents David and Julie, successfully challenged the judges’ premature buzzer on him in round 2, but he wound up eliminated in the next round. (Photo by Miranda Faulkner/Cronkite News) 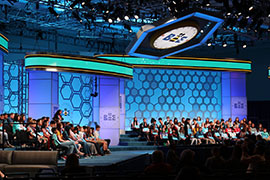 The 562 elementary and middle school students competing in the 92nd Scripps National Spelling Bee this week came from across the country as well as from some foreign countries. (Photo by Miranda Faulkner/Cronkite News) 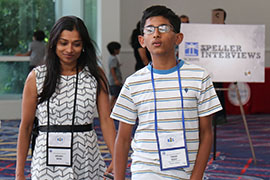 Tanish Doshi, an Oro Valley eighth-grader, with his mom, Urvashi, said he easily makes friends with other spellers at the bee because the real rival “is the dictionary.” (Photo by Miranda Faulkner/Cronkite News) 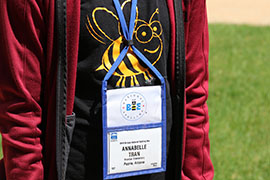 Frontier Elementary School eight-grader Annabelle Tran was back for a second year, one of four Arizona students making a return appearance at the National Spelling Bee this week. (Photo by Miranda Faulkner/Cronkite News) 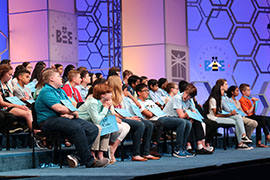 The spelling bee included 162 returning competitors. Many spellers used the same tactics, asking for pronunciations, definitions and etymologies before trying to spell a word. (Photo by Miranda Faulkner/Cronkite News)