As each volunteer describes an accomplishment she’s proud of, Hyman lays around the woman’s neck the gold medal she won for the 200-meter butterfly at the 2004 Summer Olympics in Sydney. Others applaud in support.

It’s encouragement Hyman gives the audience each time she serves as a motivational speaker. But she hopes the message has special resonance with this audience: nearly 100 female inmates sentenced to the Arizona State Prison Complex–Perryville.

Hyman’s recent talk was part of a speakers series designed to help motivate and educate inmates so they will be better prepared to face life after incarceration and break patterns that could put them back in prison.

“It shows inmates that you can be who you’re going to be, you need to find something you’re good at and then you do it,” she said.

The program is the brainchild of Sue Ellen Allen, who after serving a seven-year sentence at Perryville founded GINA’s Team, an organization focused on educating inmates before and after they’re released.

“I want it to be life changing,” Allen said. “I want them to take away from each program some inspiration that ‘I can succeed no matter what. I’m not my past, I have a future.'”

She named the organization after her roommate at Perryville, Gina Panetta, who died from cancer while in prison. The name also stands for Gets Inmates’ Needs Addressed.”

Allen gets ideas for speakers and topics through letters and online exchanges with current and former inmates, who let her know about the challenges they face.

“Living in a place behind bars, it’s easy to lose hope,”she said. “What we’re hoping to do is to let them learn how to use their voice and how to be a part of their community.”

Sinema, who is now on the advisory board for GINA’s Team, said her talk focused on opportunities for change through education.

“It was very powerful,” she said. “The women were really responsive, really eager for information, really smart, respectful.”

“Most of the time they get the idea that no one cases, that they don’t matter,” Vesecky said.

“They love to talk, they love to tell their stories,” Green said. “They’re always willing to respond to anything we ask.”

Hyman, who now has spoken at the prison three times, said she was nervous before her first visit but found the inmates open and gracious.

“They’re so thankful, and they’re so willing to listen and to learn,” she said. “Their hearts are so open and they face such an uphill battle with such courage that it inspired me, and so that’s why I keep coming back.”

– Inspiration : Gina Panetta, Sue Ellen Allen’s roommate at Perryville who passed away in 2003.

– Programs: Monthly guest speakers, classes on topics such as civics, writing and budgeting. 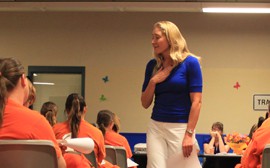 Olympic gold medalist Misty Hyman speaks as part of a program that focuses on educating female inmates so that they will be ready to be part of their communities upon release. (Cronkite News Service photo by Rebekah Zemansky) 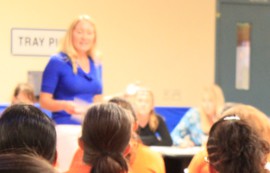 Olympic gold medalist Misty Hyman was part of an speaker series that strives to encourage the female inmates to focus on their futures. (Cronkite News Service photo by Rebekah Zemansky) 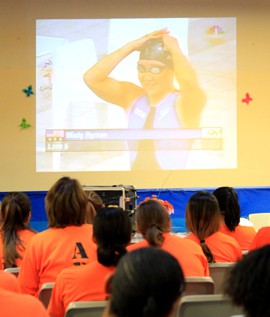