NOGALES – Cells at Santa Cruz County’s new $48 million jail feature computerized doors instead of key locks. The 372 beds vastly increase the current capacity of 98 and eliminate the need for double-bunking. The grounds are less prone to flooding during heavy rain.

Perhaps even better for county officials: An agreement to house inmates for federal agencies like Border Patrol and the U.S. Marshals Service will cover much of the cost.

Sheriff Tony Estrada said extra beds will be contracted to federal agencies for around $65 daily per inmate.

“Our hope and our plan is to house low level offenders, mostly immigration, who really have not committed any crime other than having crossed the border illegally maybe one or more times,” Estrada said. “They’re ideal inmates for us; they’re very low maintenance.”

If bunks are available, the current jail takes federal inmates, sometimes up to 30 at a time, that were apprehended too late in the day to go to Tucson, Estrada said.

Having more jail space nearby will take pressure off of agents along the border, said DeeDee McChargue, a supervisory deputy U.S. marshal based in Tucson. Those arrested around Nogales are taken to federal court in Tucson and, if sentenced to jail, usually are jailed there.

“For us having Santa Cruz is going to be very helpful,” McChargue said. “It frees up space closer to the courthouse.”

A contract with the U.S. Marshal’s Service expands the agreement with Santa Cruz County to have the jail also hold inmates serving federal sentences, most of them involving immigration offenses, McChargue said. Those inmates will total about 150 initially, she said.

The new jail also has units for inmates with unique housing needs, like minors charged as adults who must be housed separately from both adults and other juveniles. Until now the county has paid other Arizona facilities to house these inmates; now Santa Cruz may start to house these inmates for other counties.

That revenue also will help pay off construction costs, funded by voters in 2005 with a half-cent sales tax.

“We’re in the unique position to be able to provide for other counties something that they don’t have and they cannot afford to build right now,” Estrada said. “That’s refreshing, obviously, to know that you’re not seeking help but you’re in a position to where you can actually provide some kind of accommodation for other counties.”

Along with more space and the opportunity to generate revenue, a modern jail means officers can take advantage of camera surveillance to maintain security, said Detention Officer Marco Rodriguez.

“The technology’s a whole lot better,” Rodriguez said. “Now we have eyes everywhere, the intercoms work as well as radios.”

“I think the community will benefit,” Morales said. “We’re proud of it in every aspect.” 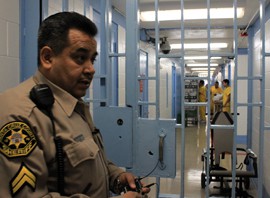