WASHINGTON – A Diné College official asked a Senate committee Wednesday to fund “vitally needed” construction at the school – money that Congress has approved three times already since 1971 but has never allocated.

The latest bill would “modernize prior legislation” – from 1971, 1978 and 2008 – that authorized grants for construction at the Navajo-run college, money that never materialized, said interim College President Martin Miguel Ahumada.

Ahumada said he was optimistic that this will be the time the school actually gets the funding it’s seeking – the same $2 million a year over four years that the school first asked for 45 years ago.

“We’ve never known why the funding didn’t come through but, to us, what’s important is that we have an opportunity today to begin again pursuing that, and the need has only grown,” Ahumada said after his testimony to Senate Indian Affairs Committee. “The timing is ideal to pursue vitally needed funding for construction at a time when our need is at its greatest.”

Sen. Jeff Flake, R-Arizona, said during the hearing that the college has “a critical role to play in providing opportunities for higher education and to improve the economic condition for those on the reservation and off.”

Udall also praised the school’s role in the Navajo community.

“Diné College has been very successful in offering high-quality education in many areas and I think this helps form future Navajo teachers and leaders and others that are going to play an important role there on the Navajo Nation,” Udall said.

The $2 million requested would go toward classrooms and laboratories, Ahumada said. The college is based in Tsaile, Arizona, but has six sites across three states, with more than 1,700 students enrolled during the last academic year, Ahumada testified.

He said the college has “not been able to keep up” with the development and repair needs, noting that a fourth of the college’s facilities are in need of maintenance.

Ahumada called the latest funding request “very reasonable in recognition of the tight budget, the huge demands made on the federal government for competing priorities,” noting that it’s the same amount the college first asked for in 1971.

Beyond the $2 million for construction, the bill would authorize annual Bureau of Indian Affairs funding for operations and maintenance. It would also direct the Interior Department to to submit a survey of all capital projects and facility needs of the college.

Diné College, established in 1968, was the first tribally controlled and accredited college in the United States, Ahumada said. But the facilities had poor foundations and some had unsafe insulation, he said.

In addition to fixing problems in the decades-old buildings, Ahumada said there’s also a possibility that the college will add 400-500 students as part of a college prep program. But that could be a problem when the school is “maxed out everywhere with buildings that need renovation,” he said.

Additionally, the school is expecting enrollment to near 1,900 students next year, Ahumada said.

“With the anticipated increase in future enrollment, we can no longer wait to update and enhance Diné College,” he testified. 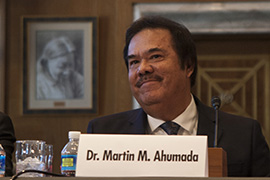 Diné College Interim President Martin Ahumada testifies in support of a bill that would fund $2 million in construction for each of the next four years at the Navajo school.  (Photo by Danika Worthington/Cronkite News) 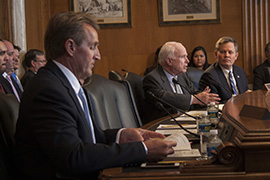 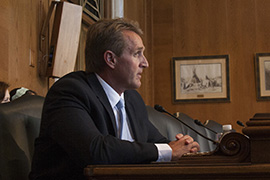