Sen. Don Shooter, R-Yuma, wants to give his constituents a chance to share the message “Don’t Tread on Me” above their back bumpers.

In a rite of spring, state legislators are proposing at least 12 special license plates that would add to nearly 50 offered by the Arizona Department of Transportation.

“We already have the other plates, so to then prohibit somebody else from having a chance just isn’t right,” she said.

Some other proposed plates are commemorative, honoring law enforcement and women veterans. Others aim to raise funds for causes such as youth development and character education. One would create a plate celebrating professional hockey in Arizona.

Any special plate design must have a financial sponsor that can provide the one-time, $32,000 cost of processing and printing the plates.

Of the $25 required to order or renew special plates, $17 goes to a party designated in the legislation. For example, proceeds from Gray’s proposed centennial plate would go to the Arizona Office of Tourism to fund centennial events and later would go into a fund that the Arizona Historical Society would use to operate the planned Centennial Museum.

But some lawmakers say the dozens of special plates Arizona already has are more than enough.

Rep. Eric Meyer, D-Scottsdale, said he’s not sure the government should be involved in fundraising for private organizations. On Thursday, he voted against a bill before the House Transportation Committee that would establish a license plate honoring women veterans, as he does for other bills calling for special plates.

“We should focus on our business, which is balancing our budget, educating our kids, health care for our citizens and public safety,” Meyer said.

Rep. Steve Farley, D-Tucson, said he votes against all special plates because they may be difficult for law enforcement officers to read.

“It used to be an Arizona plate was just the red and white, that was it, and everybody knew what an Arizona plate was just from looking at it: red and white with a little white cactus,” Farley said. “When you have as many as we’re getting and we’re going to get more all the time, then it compromises the plate’s ability to do its primary job, which is identification.”

Once a design is approved, it’s checked with law enforcement and the Motor Vehicle Division for readability.

But Aboud said special plates are a valuable way to raise money for worthwhile causes. She noted that the hunger relief plates she’s seeking would benefit Arizona food banks.

“It breaks my heart to think we have one person that goes hungry in this state,” Aboud said. “Think how many times you’re behind a vehicle and what is it you look at? Their bumper.”

Shooter authored one of two bills seeking to create a plate saying “Don’t Tread on Me.” The other, by Rep. Vic Williams, R-Tucson, wasn’t heard in committee, but Shooter’s bill, which also would create plates promoting youth development and law enforcement, made it out of committee.

Shooter, who is in his first term, said hasn’t thought much about the value of creating any of the plates, though he doesn’t consider them controversial.

“The leadership’s being nice to me, giving me some easy bills to cut my teeth on,” he said. 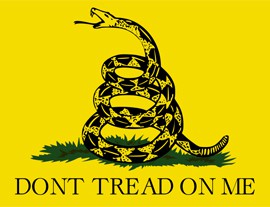 The Gadsden flag, first flown in the American Revolution and named after Continental Congressman and soldier Christopher Gadsden, has become a symbol of the modern-day Tea Party. Arizona is among several states considering special license plates featuring the “Don’t Tread on Me” design. (Photo by Vikrum Lexicon, Creative Commons)