PHOENIX – A Democratic state lawmaker says it’s time to close what he calls a gap in state law that allows people to purchase firearms at gun shows without the same background check required at shops.

Sen. Steve Gallardo, D-Phoenix, pointed to reports that at a Phoenix gun show New York City undercover officers recently were able to buy the same type of gun used to shoot U.S. Rep. Gabrielle Giffords, D-Ariz., and kill six others even after one told a seller he probably couldn’t pass a background check.

Gallardo has introduced SB 1586, which would require background checks for all guns sold in Arizona.

“This is a problem that’s crying out for a solution,” he said.

The bill would force private sellers and vendors at gun shows to do the same basic background checks as gun shops – background checks intended to screen buyers who are under 18, have criminal records or have documented histories of mental illness.

Gallardo said this loophole makes guns more accessible to criminals and minors. It’s something that criminals and gun traffickers are very aware of, he said: Arizona ranks 13th in states that export firearms to other states, according to the Bureau of Alcohol, Tobacco, Firearms and Explosives.

James Hinckley, who volunteers with Arizonans for Gun Safety, a community group that educates about gun violence, came to the Capitol to support Gallardo’s bill along with other survivors of gun violence.

Hinckley said he was 17 years old when he was shot during an argument with another teenager. Without a paper trail, no one could determine how Hinckley’s shooter was able to get his hands on a firearm.

“I know firsthand that some people I’ve been affiliated with will go to gun shows buy guns and then jack up the price and sell it later to anybody and everybody that they want,” Hinckley said. “They don’t care whether the kid is 15 or 50; they’re just trying to make a profit.”

Hills said her brother, a Michigan police officer, was killed by a shooter who was able to buy and deal weapons despite a documented history of mental illness.

“This is not a liberal-versus-conservative issue; this is a life-and-death issue,” Hills said. “We need one single law that applies to everybody.”

Gallardo said he tried and failed with the same legislation when he served in the state House.

“I understand its going to be an uphill battle,” he said. “I think most importantly we’ll continue to educate the public.”

Gallardo’s bill had yet to be assigned to a committee. 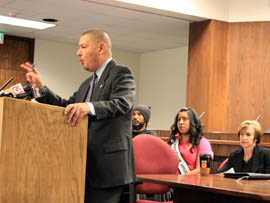