PHOENIX — Traces of guns seized on both sides of the border helped federal agencies break up several rings involved in purchasing firearms in the Valley and shipping them to Mexican drug cartels, a federal official said Tuesday.

Authorities had arrested at least 20 people, with an additional 14 facing charges, for participating in the so-called straw purchases, according to Dennis K. Burke, the U.S. attorney for Arizona.

The suspects included those who purchased the weapons and those who bought the guns from them to take into Mexico, Burke said. Officials seized more than 700 guns, including AK-47s and powerful .50-caliber  rifles.

Agents traced weapons seized at crime scenes in Mexico, Texas and Arizona back to those who purchased the guns legally from shops in the Phoenix area.

One of those charged purchased 40 semi-automatic weapons in a single day from a gun shop in Glendale, according to the indictment. At the same store, another buyer put a down payment on three sniper rifles at one time, records showed.

Then agents tracked connections between the buyers and the dealers who sold the guns to drug cartels using records, witnesses and phone calls, the indictment said.

Those accused of making straw purchases face charges alleging that they claimed falsely in documents that they were purchasing the guns for themselves.

“Straw purchasers might be considered by some as the low rung on the ladder, and they might be, but straw purchasers play an integral part in the firearms trafficking organization,” said Special Agent Bill Newell of the Bureau of Alcohol Tobacco and Firearms. “In my opinion [they] have as much blood on their hands as those individuals who ultimately pull the trigger.”

Burke said those making such purchases don’t care where the weapons end up or that they are used in crimes.

“Most of these straw purchasers did it for the money, for greed,” Burke said. “The drug cartels go shopping for their war weapons in Arizona, and we’ve got evidence here.” 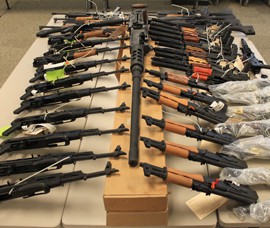 Straw purchasers are those who buy guns on proxy for cartels, claiming that they are buying for themselves. Many of the weapons taken in the recovery were purchased legally by Arizonans who then delivered the guns to cartel representatives. (Cronkite News Service Photo by Rebekah Zemansky) 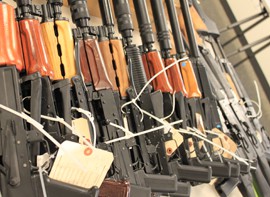