PHOENIX – Two sheriffs gave a grim assessment of security along the U.S.-Mexico border Thursday, telling a lawmakers they need the federal government to send more soldiers.

“Get the military on the border and get them there now,” Cochise County Sheriff Larry A. Dever said in a presentation to the Senate Border Security, Federalism and State Sovereignty Committee.

Pinal County Sheriff Paul Babeu said that a “visible human fence” comprised of armed military men and women is the answer to reducing crime and cutting down the flow of illegal immigrants.

“The military should be there as a visible deterrent,” Babeu said. “The [border] problem has not gone away. Do not be lulled into a false sense of security.”

The sheriffs both proposed a three-pronged approach to border security: increased the military presence, improving existing infrastructure such as the border fence and bolstering enforcement.

“As long as we have a porous border, no other socioeconomic solution will have value,” Dever said.

Babeu said the Border Patrol’s Yuma sector has seen a significant decline in crime and illegal border crossings since it focused on those three areas. He also pointed to significant reductions in crime and apprehension rates along the San Diego Border Patrol sector after the construction of a double-layered border fence.

The U.S. Department of Homeland Security recently canceled funding for a controversial “virtual fence,” a billion-dollar project led by Boeing Corp. to put a line of sensors along the U.S.-Mexico border. Instead, DHS plans to use proven technologies such as mobile surveillance systems, unmanned aircraft and thermal-imaging devices.

Allen said in an interview that she would like to see the Tucson sector imitate successful border security initiatives employed in the California and Texas sectors.

“We need a fence built, we need a surveillance and we need a lot more men on the ground,” Allen said. “And if we can do those things I believe that we will be able to get a handle on this like these other sectors.”

Sen. Robert Meza, D-Phoenix, suggested a holistic approach to border security by addressing the economic and social crises in Mexico.

“This is a systemic problem,” Meza said. “The root of the problems lie in Mexico, so why haven’t the U.S. senators tackled the problems in Mexico?” 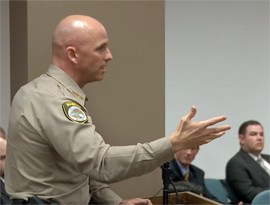 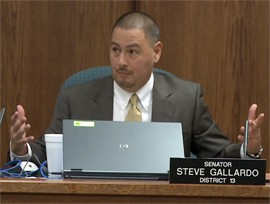 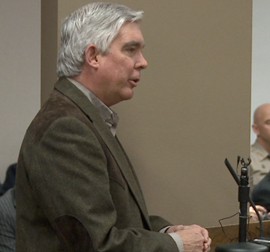 Cochise County Sheriff Larry A. Dever speaks to the committee. “Get the military on the border and get them there now,” he said.