PHOENIX – Supporters say a ballot proposition designed to make it easier to swap rather than sell or lease state trust land would help faciliate agreements that preserve military installations.

Around the Army’s Fort Huachuca, they say, keeping state trust land open would prevent residential and commercial encroachment from interfering with sophisticated communication gear tested there.

For Luke Air Force Base pilots, they say, keeping trust land as open space would help guarantee paths into out of auxiliary airfields in Gila Bend and Wittmann.

But a provision of the state Constitution, backed by a 1990 Arizona Supreme Court ruling, makes it impossible to simply trade trust land for parcels elsewhere. Instead, the state is limited to selling or leasing parcels.

Conservationists, developers and state officials have tangled in the past over proposed land swaps, with opponents criticizing the proposals as unequal trades and the process as insufficiently transparent.

But a diverse coalition of groups ranging from environmentalists to military leaders to ranchers is backing Proposition 110, which would amend the state Constitution to allow land swaps in the interest of preserving military bases or for conservation.

Those groups include the Arizona State Land Department, which is charged with managing trust land to generate revenue for public education.

In the case of trust land around Fort Huachuca, State Land Commissioner Maria Baier said, the federal government can trade Bureau of Land Management parcels that the state can lease for renewable energy plants.

“There are some very attractive BLM sites,” she said.

Baier said it’s worth noting that Proposition 110 faces no organized opposition, something that she attributed to involving all stakeholders.

“I think that the most effective way to develop public policy is by consensus and to include as many diverse voices as you can during the drafting,” she said. “That eliminates problems down the road.”

Another key, supporters say, is the proposition’s requirement that a land swap be only for other public land and include, among other things, public hearings and at least two independent appraisals paid for by applicants. In the end, voters statewide would decide whether to approve swaps.

“There are so many places where people that object have an ability to come out and object and see if they can get it changed,” said Nelson, who authored the legislation referred to the ballot.

“I assume they would try to include as many people as possible, will put together exchanges that are supported strongly by a broad spectrum of people, because if they don’t they won’t pass,” she said.

Sierra Vista Mayor Bob Strain said he supports Proposition 110 because it would protect the many area residents and business relying on Fort Huachuca.

“The fort is inside the city limits; probably three-fourths of the people employed there reside in Sierra Vista,” Strain said. “They’re very personal connections – the military is part of the culture.”

Baier wants to see those connections protected at other military installations.

“We do not want to see base closures or any sort of scaling down of military operations in the state of Arizona,” Baier said. “It’s a really great functioning system, and we want to keep it intact and grow it if possible.” 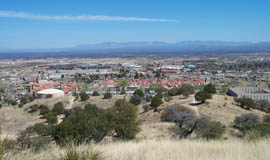 Supporters of Proposition 110 say land swaps preserving open space can help Arizona retain military facilities such as Fort Huachuca in Sierra Vista. The ballot measure would allow the state to swap trust land in the interest of preserving bases and conservation and would subject such deals to public scrutiny and a statewide vote. (Photo Courtesy of the Arizona Department of Water Resources)