TUCSON – In 2004, DNA analysis first helped forensic anthropologist Dr. Bruce Anderson give a family answers about one young woman who disappeared while crossing illegally into Arizona.

“It showed everyone in our office that there’s nothing we can’t do to try to identify a person,” Anderson said. “If it’s only one bone, if we can get some clue to who that person is, the family can contribute a saliva sample and the DNA lab can make that comparison.”

Since that case, which led to a family in Mexico’s Yucatán Peninsula, the Pima County Office of the Medical Examiner has used DNA to identify more than 70 sets of remains.

Their next step: persuading more relatives to provide DNA samples to compare with the data on file.

“The biggest challenge is to get the word out to the families,” Parks said. “Now the basic machinery is in place, and we’re hoping that more people submit samples and we can get more people identified.”

Jacobo Tellez Ocampo, chief of the Department of Protection of Mexicans in the Tucson consulate, is already working on the challenge of asking relatives to consider the grim possibility that their missing relatives are dead and then to submit DNA samples for comparison.

“We have a lot of cases that we already have in our files that these families are looking for loved ones,” he said. “Mexican families, it’s like a traditional thing, they want to find family.”

The agreement brings together two crucial sets of data currently maintained separately by Pima County and the consulate: results of DNA tests on remains and DNA samples provided by relatives.

The Mexican government has paid for more than 280 DNA tests conducted on remains, while Pima County has on record the results of another 200 tests funded by grants from U.S. sources.

Calderón-Jaimes, the consul general, said the agreement here will be the model for similar partnerships along the border.

“We have had for many years worked very close with the medical examiners, and we have a very good relationship,” he said.

Anderson said some of those who have died leave behind young children who will grow up with questions about their mothers and fathers.

“No one ever gave them a good answer about what happened,” Anderson said. “That person could be the relative that gives the family reference sample, that gives the cheek swab and then that DNA could be matched to bones that were found 20 years earlier, that could be an identification.”

In the meantime, Parks and Anderson will continue to collect DNA from each case that passes through their office since even a single piece of bone may someday lead to an identification.

“I think after I’m retired, through the use of DNA, there’ll still be some of these identifications taking place,” Anderson said. “I’m never giving up on any of them.” 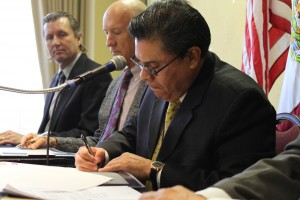 Juan Manuel Calderón-Jaimes, the Mexican consul in Tucson, signs an agreement by which Pima County and consular officials will collaborate on a DNA database to help identify those who die in the desert. Looking on, from right are Dr. Bruce Parks, Pima County’s chief medical examiner, and Dr. Bruce Anderson, a forensic pathologist in the medical examiner’s office. (Cronkite News Service Photo by Rebekah Zemansky)