As an emergency room doctor tried to figure out what was wrong, the man’s friends showed a package of herbs clearly marked “not for human consumption.”

The man and his friends had smoked it.

As a doctor at Tucson Medical Center, that was Matt Heinz’s first encounter with substance often referred to as spice. The mix of herbs, sold legally as incense, is increasingly popular among those who say it produces a high comparable to marijuana.

As a state representative, Heinz wants to prevent more people from winding up in the hospital.

“I think that it’s a recreational and a stupid use – an off-label use – of a substance that is probably being quietly marketed that way,” said Heinz, a Democrat.

Spice is a mixture of herbs varying by the brand and sprayed with a chemical, JWH 018, that mimics the effect of tetrahydrocannibol, or THC, in marijuana. It is sold under brands including K2, Black Mamba, Wicked X.

Concerns about spice have prompted Kansas, Kentucky, Alabama, Arkansas and Missouri to regulate K2, one brand under which spice is sold, or its active ingredient.

Heinz said he is considering legislation that would have Arizona follow suit or take lesser steps to regulate spice once federal and state health officials offer guidance.

“Ultimately what I would like to do is follow the recommendations of the accepted groups  the CDC, the Health Department, the FDA,” he said.

Options range from a ban to making spice a controlled substance like Pseudoephedrine, which by law is sold behind the counter because it can be used to make methamphetamine.

“We have to work on possibly some kind of sanction for the folks that are marketing it off label,” Heinz said, “because you can’t have a smoke shop or a small businessperson convincing folks to do stuff that could endanger themselves.”

He said Arizona hospitals called about users, mostly high school students, who came in after experiencing side effects including agitation, nausea, fever, hallucinations and seizures.  Some patients were altered, others combative.

Boesen said that it’s too soon to know about long-term effects, but Poison Control records every call to track exposure and symptoms associated with risky substances so that the office can coordinate with agencies like the federal Food and Drug Administration.

FDA spokeswoman Elaine Gansz Bobo said that spice is currently classified as a street drug alternative, meaning that it is unapproved and potentially threatening. Though the substance may be legal, manufacturing, marketing and distribution may be subject to regulation, she said.

During a reporter’s visits to four Phoenix-area smoke shops that carry spice, owners and employees declined to discuss the substance, citing legal advice.

Jerrod McGill, a customer at one shop, said he and his friends have smoked spice and refer to it as a “legal marijuana.” Since the price is comparable to marijuana, McGill said, some of his friends use spice because it doesn’t show up on drug tests.

“I’ve noticed that it’s a lot like smoking marijuana except for the fact that it’s legal – it’s legal now anyways,” McGill said.

Stephanie Siete, public relations director for Community Bridges, an organization providing substance abuse education and treatment, said some lawmakers have contacted her for information about spice.

“This is so new, not like a cigarette,” said Siete, who said that the effects are closer to those of hallucinogenics such as LSD.

Siete, who testified earlier this year as state legislators approved a ban on sales of the herb salvia divinorum, which produces hallucinogenic effects when smoked, to those under 21.

In the meantime, Siete hopes that potential spice users will think twice and choose to be careful.

Here are quick facts about the substance commonly referred to as spice:

– Composition: A mixture of herbs varying by brand sprayed with a chemical, JWH 018, that when smoked mimics the effect of tetrahydrocannibol, or THC, in marijuana. 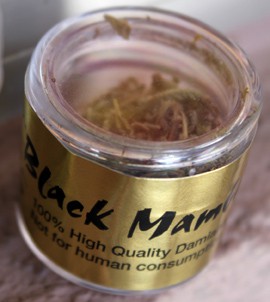 Concerns about spice have prompted Kansas, Kentucky, Alabama, Arkansas and Missouri to regulate K2, one brand under which spice is sold, or the substance’s active ingredient. (Cronkite News Service Photo by Rebekah Zemansky)