WASHINGTON – As Arizonans gather to celebrate Thanksgiving, more than 1 million of them will be putting turkey on the table with the help of food stamps this year.

Enrollment in the Supplemental Nutrition Assistance Program — SNAP, better known as food stamps — has grown by 87 percent in Arizona since 2007, according to the U.S. Department of Agriculture. That’s about 16 percent of the state population, or one Arizonan in six.

The increase in SNAP recipients comes as the cost of a traditional, 10-person Thanksgiving Day feast has reached a new national high and jumped sharply in Arizona as well.

The American Farm Bureau Federation‘s annual report estimates a holiday meal will cost $49.20 on average nationally and $50.06 in Arizona, an increase of almost $6 from last year in the state.

“It’s getting more difficult for a lot of people and it’s unfortunate, especially for families with kids,” said Katie Kahle, program manager for the Arizona Community Action Association.

Making ends meet normally is tough enough, said Kahle, who also manages the association’s Arizona SNAP Experience. But doing so during the holidays is especially hard.

“We get parents who call us and they can’t even afford to pay their electricity, let alone buy Thanksgiving dinner,” Kahle said.

The “feast” envisioned by the farm bureau will certainly feed 10 but will leave little for seconds, let alone traditional leftovers. The cost estimate was based on an informal price survey conducted in 35 states with the help of 141 volunteers, said farm bureau spokeswoman Cyndie Sirekis.

She said the holiday meal is still fairly inexpensive after adjusting for inflation. But Kahle said that $50 can be a lot for struggling families to swallow for just one meal.

Kahle said the average SNAP benefit for a person in Arizona is $126.71 a month or about $4.22 per day — less than the $5-per-person cost for Thanksgiving with trimmings.

A spokesman for the Arizona Department of Economic Security said it’s nearly impossible to determine an average payment, because SNAP benefits are determined case-by-case and vary depending on family income and size. But even the state’s own numbers show a maximum benefit of $200 a month for a single person, falling to $5 a day for families of eight.

Kahle said typical dollar-stretching tips – like comparison shopping or clipping coupons – is not an option for everyone. People on a budget can’t afford to buy a newspaper to clip coupons, for example, and it may be too expensive to travel store-to-store for a bargain.

It can be even harder for Arizonans on food stamps for the first time. Kahle said she often refers such people to programs at their children’s schools, but has noticed that some parents are afraid of embarrassing their kids or facing the shame they associate with applying for food stamps.

There are some strategies everyone can use, said Megan O’Neil, a family, youth and communities finance educator at the University of Maryland. One of the best ways is to bring more people together to “get the benefit of the economy of scale,” something she’ll be doing herself this holiday.

She said she has noticed people focusing more on relationships than material things.

“In tough economic times, families do come together, they bond together,” O’Neil said. “The psychology is that we’ve got everything but money.”

Leslie Watkins is the president of the family and consumer science and education division of the Association for Career and Technical Education. She has also seen more families coming together and planning potlucks, along with an increase in community gardens and kitchens.

“More people are getting their hands in the soil to grow their own food,” Watkins said.

But Terry Shannon, president and CEO of St. Mary’s Food Bank in Phoenix, said food is just one of the worries for Arizona families in tough economic times. He sees people who have less for food after paying rent, utilities, cars and other monthly bills.

“We’re absolutely seeing folks who are the working poor, folks who just don’t have the ability to make ends meet,” Shannon said.

But while higher food, transporation and fuel coats have forced some food banks to cut back, St. Mary’s still plans to donate 74 million pounds of food this year – including 7,000 holiday food boxes with turkeys handed out Tuesday.

“We made the decision that turkey at Thanksgiving time is such an important tradition to Americans and our culture,” Shannon said. “It’s something we’ve never considered not doing.”

Itemized cost of Thanksgiving dinner for 10, according to the American Farm Bureau Federation: 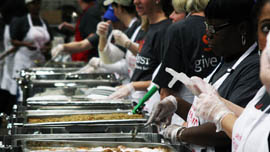 Unlike other times of the year, folks who can’t afford food at Thanksgiving don’t have to look far to find a charity meal, like this one served by volunteers Tuesday at the Washington, D.C., Convention Center. (Cronkite News Service photo by Cassondra Strande) 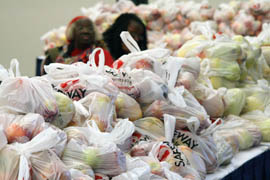 The fixings for a traditional Thanksgiving feast for 10 will cost just over $50 this year in Arizona, according to estimates by the American Farm Bureau Federation. (Cronkite News Service photo by Cassondra Strande) 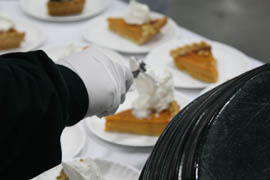 A staple of Thanksgiving dinners, pumpkin pie, will set the average family back $6.78 this year, part of a total holiday meal tab estimated at just over $50 for Arizona families. (Cronkite News Service photo by Cassondra Strande) 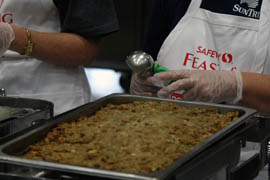 More than 1 million Arizonans. about one in six, will be putting Thanksgiving dinner on the table this year with the help of food stamps. Both the number of people on the Supplemental Nutrition Assistance Program and the average cost of a Thanksgiving meal are up this year. (Cronkite News Service photo by Cassondra Strande)