It was a scene straight from an action movie. A couple had their boat out on Saguaro Lake in September when the husband, who was driving, noticed a boat heading directly for them.

At the wheel of the other boat: a man authorities say was well over the legal limit.

As the speeding boat hit and flew over the first boat, the husband dived out of the way and into the water. His wife wasn’t as lucky. She was hospitalized with serious injuries.

“An inch or two the other way and it would have struck her directly and killed her,” said Capt. Joe Rodriguez, commander of Maricopa County Sheriff’s Office Lake Patrol Division, who investigated the accident. “After seeing it, I couldn’t tell you how somebody survived that.”

Maricopa County officials were waiting on blood test results before filing charges against the other driver, who wasn’t hurt, Rodriguez said.

“I see it all the time,” said Kevin Bergersen, boating law administrator for the Arizona Game and Fish Department. “People who would never, ever drink and drive choose to get into their boat and drink to the point where they’re impaired.”

In January 2009, punishments for those convicted of operating under the influence got tougher, but enforcement officials say not tough enough to counter the culture of drinking on the water.

“The paradigm that we can’t get away from is that alcohol is involved in a lot of our recreation,” said Tim Baumgarten, OUI/Watercraft Program Manager for the Arizona Game and Fish Department.

At the same time, a budget crisis in the state has made it harder to fund enforcement on the Colorado River and lakes.

The latest impaired-boating law, pushed by Sen. Linda Gray, R-Phoenix, sought to give those convicted of boating under the influence the same punishment as people who get driving under the influence convictions. Then-Gov. Janet Napolitano signed the law, which made operating a boat while impaired a Class 1 misdemeanor, which means boaters face fines and possible jail time.

But even though the laws are tougher, Rodriguez said, punishments for drunken boaters still don’t have the teeth to deter drinking on the water.

Under the recent law, first-time offenders must pay a minimum fine of $250, but the average offender is ordered to pay between $1,200 and $2,500, said Baumgarten of Game and Fish.

The law also calls for first-time convicted drunken boaters to serve 10 days in jail, but the option to attend substance-abuse counseling means most spend 24 hours behind bars.

“Even for the extreme cases, they can serve 10 days,” said Rod Albright, prosecutor for the Mohave County Attorney’s Office, which handles many Colorado River boating cases. Extreme operating under the influence is when a boat operator’s blood alcohol level is between 0.15 and 0.2 percent.

From the prosecutor’s standpoint, trying boating cases is more difficult partly because of the liquid crime scene.

“There’s not a lot of evidence when the crime scene is fluid,” Albright said. “It’s hard to reconstruct what happened.”

“It’s frustrating sometimes,” he said. “A drunken boat operator can be a real menace. There are people that die and get injured, but sometimes juries are sympathetic.”

He said many jurors see being drunk on a boat as part of having a good time.

Adding to those difficulties, Albright said, limited resources and high-powered defense attorneys mean someone who was charged with operating under the influence may wind up getting sentenced for a less-serious offense.

“There is some plea-bargaining. It’s unfortunate, but that’s what we have to do,” Albright said.
Baumgarten and Rodriguez both support tougher punishments for drunken boating.

“It’s long overdue,” Rodriguez said. “If you’re going to have an OUI law on the books, you need to have some teeth with it.”

“Those same people that are OUI on the water, a high percentage are going to be DUI on the land,” Rodriguez said.

Alberto Gutier, director of the Governor’s Office of Highway Safety, said he sees the same risks, noting that law enforcement agencies regularly set up checkpoints near lakes and rivers.

“We do details near the lakes and rivers so that people have to go through our checkpoints after they get off the water,” Gutier said.

His office also partners with boating agencies in advertising.

“The dual message gets people thinking about it early _ before they even get to the lake,” Gutier said.
Baumgarten sees another possibility: having an operating under the influence conviction serve as a prior offense in DUI cases.

“It sits silent until you get a DUI. Then it becomes a second offense and all the aggravated penalties kick in,” he said.

Second-time operating under the influence offenders get double the fines and can also choose to enter substance-abuse counseling and get their jail sentences reduced to 30 days.

But before offenders get to trial, they need to be caught. In 1993, 12 of the 14 agencies responsible for boating enforcement in Arizona started conducting regular sobriety checkpoints on the water during the busy summer months.

“They do work,” Rodriguez said of the checkpoints, adding that they keep enforcement agents visible to boaters and remind them to be safe on the water.

According to the Game and Fish Department’s Boating Safety Report, authorities made 316 arrests in 2008 for operating under the influence. That’s the fewest arrests since 2003, when Bergersen started keeping track.

The report said there were 11 multi-agency checkpoints in summer 2008, bringing authorities in contact with 1,071 boats. Because of shrinking budgets, however, 2009 saw just two such checkpoints.

“Our officers’ time on the water was very minimal,” said Baumgarten, whose region includes Lake Havasu and most of the Colorado River.

But he and others said enforcement and harsh punishments alone aren’t the answer if boaters continue to associate time on the water with drinking alcohol.

“It’s possible, but you have to make it routine for people,” Baumgarten said. “Sadly, for most people it takes a tragedy happening to them before they realize how dangerous it is.” 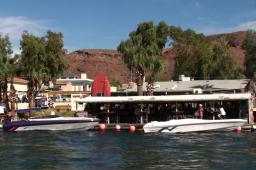 Boats tie up next to an establishment along the Colorado River near Parker. (Cronkite News Service Photo by Travis Grabow)