PHOENIX – Xavier Gutierrez, the President and CEO of the Arizona Coyotes, hadn’t planned a career path that would involve ice and hockey pucks. He was going to be a soccer star.

“My first dream was to be a forward for Chivas de Guadalajara,” Gutierrez said.

C.D. Guadalajara is a Mexican professional football club, but many fans know the team by its nickname, Chivas. Born in Guadalajara, Mexico, Gutierrez grew up a Chivas fan, as so many do in the state because of the popularity of the soccer team.

Even after his family moved to the United States when Gutierrez was in kindergarten, he remained a Chivas fan but grew to love other sports while being raised in San Jose, California.

But when did hockey become a part of Gutierrez’s life?

“I’ll be the first one to admit, never did I ever imagine that I would be in sports, be in hockey,” Gutierrez said.

Life has a funny way of introducing opportunities. Hockey entered Gutierrez’s world while he was a freshman at Harvard, studying government. During a visit to the campus bookstore, Gutierrez ran into Steve Martins, a Harvard hockey player, who invited him to watch a game.

Eventually both Gutierrez and Martins would end up working in the NHL. Martins played for a string of NHL teams for more than a decade, while Gutierrez got involved with the league more recently following a 20-plus year career as a business executive and investor. When Coyotes owner Alex Meruelo offered him the role, the hockey club made historical strides as Gutierrez became the first Latino president/CEO in NHL history.

Though it’s his first job working with hockey in any aspect, the sport’s untapped influence has intrigued him for decades. After Gutierrez returned to his Bay Area home from college, hockey once again made an impactful appearance with the arrival of the San Jose Sharks in 1991.

“I saw them take over San Jose and really become the team of my hometown,” Gutierrez said.

The Sharks were the first NHL franchise to be based in the San Francisco Bay Area since the California Golden Seals relocated to Cleveland in 1976.

“I have friends, Latinos, who when the Sharks came to town, probably couldn’t have told you what a puck was,” Gutierrez said. “And who are now ravid Sharks fans.”

Hockey continued to play a role in Gutierrez’s life as the sport captivated some of his extended family members. Gutierrez watched hockey influence three of his nephews in East Los Angeles, a predominantly Hispanic community.

Even though it wasn’t the most popular sport in East LA, things changed when the Los Angeles Kings hosted various youth camps. Because of these camps, Gutierrez’s three nephews played hockey as their first sport.

“I’ve seen it,” Gutierrez said. “I’ve seen what can happen when a club comes in and really makes some intentional effort to go into the Latino community and embrace them.”

As his hockey acumen grew and he witnessed the sport’s impact on specific communities, Gutierrez unknowingly prepared for the role he is in today.

“These experiences are very core to who I am,” Gutierrez said.

According to the Hispanic Chamber of Commerce, Hispanics make up 30% of Arizona’s population and 40% of Phoenix Metro. The community is a significant portion of the state’s population and Gutierrez understands this.

“From a strategy standpoint, the Arizona Coyotes haven’t reserved themselves to things that are only related to ice hockey or sports,” Villalobos said. “They’re going out there in the community and working with healthcare groups, working with education groups, working with business groups and really becoming a convener for business in the Latino community.”

The Latino Advisory Council’s mission is to “foster relationships and to provide guidance and advice as ambassadors engaged with corporate, civic and nonprofit entities.”

“It’s really significant to be a part of this council for the Arizona Coyotes,” Villalobos said. “Because it’s not the norm.” 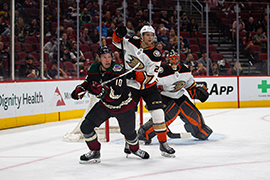 Xavier Gutierrez’s path to the Coyotes started when he was at Harvard and ran into one of the university’s hockey players at a bookstore. (Photo by Savannah Nugent/Cronkite News)