WASHINGTON – Arizona conservative groups hailed the confirmation of “capable, brilliant” Judge Amy Coney Barrett to the Supreme Court, after a rushed vote Monday that split the Senate along party lines.

Barrett’s confirmation comes less than six weeks after the death of Justice Ruth Bader Ginsburg and cements a conservative majority on the high court for years to come – what Senate Minority Leader Chuck Schumer called a “decades-long effort to tilt the judiciary to the far right.”

No Democrats voted for Barrett, who was sworn in Monday night at the White House by Supreme Court Justice Clarence Thomas within hours of the 52-48 Senate vote. Maine Sen. Susan Collins was the only Republican to vote no on the nomination.

Arizona’s senators also split on party lines, with Republican Sen. Martha McSally saying before the vote that she was eager to vote for “this highly qualified pioneering woman.” But Democratic Sen. Kyrsten Sinema, who voted no, expressed concerns over the weekend over what she called Barrett’s “inconsistent views on legal precedent.”

One of the precedents progressives are more concerned about is Roe v. Wade, the 1973 decision that recognized a woman’s right to an abortion. Democrats complained that Barrett dodged questions during her confirmation on a range of issues, including abortion rights, gun control, health care and climate change.

But conservatives in Arizona defended Barrett’s performance at the hearings, and said it indicates the type of justice she will be – one who will interpret the law and apply constitutional principles, not personal beliefs.

“You know, it’s her job to either rule on the law or say, ‘My views get in the way and I’m going to recuse myself.’ And she said that openly in her confirmation hearings,” said Charles Heller, host of Liberty Watch Radio in Tucson.

“I think she made that clear in her confirmation hearings,” said Heller, adding that is “the way it was meant to be.”

Cathi Herrod, president of the Center for Arizona Policy, said Barrett’s performance during four days of hearings last week showed she is “one of the most capable, brilliant individuals ever to be nominated to the United States Supreme Court.”

“She would not answer policy questions,” Herrod said. “This is about how a judge will interpret the law, how the judge will apply constitutional principles. It’s not a policymaking role. And I think those that oppose Judge Barrett had to look for other reasons.”

But critics say the reason Barrett refused to be pinned down in the hearings is because she is an “extremist.” John Feinblatt, president of Everytown for Gun Safety, worries that Barrett’s Barrett’s views on the Second Amendment will reverse years of gun-safety gains, and that Barrett “has no place on the Supreme Court.”

“Senate Republicans’ hypocritical attempt to jam her through has everything to do with appeasing special interests like the gun lobby,and Everytown will work like never before to vote them out this November,” Feinblatt said.

Barrett is President Donald Trump’s third Supreme Court appointment, following Justices Neil Gorsuch and Brett Kavanaugh. She is scheduled to be formally sworn in at the court Tuesday by Chief Justice John Roberts.

Democrats were also angry that the confirmation was rushed through by the Republican majority in a little over a month and that the vote came just eight days before Election Day.

Schumer chided the “glaring hypocrisy” of pushing Barrett through this close to an election, when the GOP refused to even grant a hearing in 2016 to then-President Barack Obama’s Supreme Court nominee, Merrick Garland, who was nominated eight months before the election.

“Nearly every Republican in this chamber, led by the majority leader, four years ago refused to even consider the Supreme Court nomination of a Democratic president,” Schumer said.

Schumer said the only difference between Garland and Barrett is her views on legal issues.

“The American people will suffer the consequences of Judge Barrett’s far-right, out of the mainstream views for generations,” Schumer said.

McSally joined other Republicans who brushed aside what they called Democratic attempts to discredit Barrett’s credentials.

“Over the last week or so there’s been a lot of distracting delay tactics by the other side of the aisle trying to derail this highly qualified woman from being on the Supreme Court,” McSally said.

But Sinema said it was Barrett’s “inconsistent views” that soured her on nomination.

“After watching the Senate Judiciary Committee confirmation hearings, reading Judge Barrett’s legal opinions and scholarly writings, and speaking with her directly, I am concerned about Judge Barrett’s inconsistent views on legal precedent, and how those inconsistencies impact her obligation to interpret and uphold the rule of law,” Sinema said in a statement.

Herrod questioned Sinema’s rationalization, saying she was “dancing around the issue, clearly trying to find grounds for her to vote no.”

McSally, who was at the White House with other Republicans for Barrett’s swearing-in, said she has no doubts Barrett is right for the job.

“We’ve had hearings where she showed how incredibly capable she is with no notes in front of her,” McSally said before the vote Monday. “It was really like a lesson for every American to tune into her understanding of the Constitution and the role of a judge.” 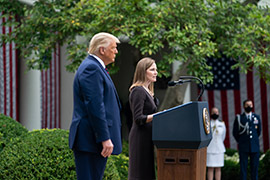 President Donald Trump announcing Judge Amy Coney Barrett’s nomination to the Supreme Court in a Sept. 26 Rose Garden ceremony, where several of the hundreds of attendees are believed to have contracted COVID-19. Barrett, whose confirmation was rushed through the Senate, was sworn in Monday at a White House event that Trump said would be smaller than the nomination announcement. (Photo by Andrea Hanks/The White House)