PHOENIX – High school athletic directors and football coaches are eager to kick off the season – assuming the season even happens – but the COVID-19 pandemic likely means no fans in the stands, tough safety protocols for players on the field and tighter budgets for high school sports.

That could lead to cuts to equipment expenditures and, perhaps, to smaller sports programs that depend on revenue from football in the fall and basketball in the winter.

High school sports in Arizona have been stopped, revived and delayed again under state orders and limits issued by the Arizona Interscholastic Association, the governing body for high school sports. But the situation is fluid, similar to that of college and professional sports pondering whether it’s possible to have a 2020 season at all.

“You miss hearing the sounds of the gym and the weight room,” said Pete Jelovic, athletic director at Centennial High School in Peoria. “Even when school starts, the passing periods or the lunch periods, you hear all of those things and you get to interact and you build up towards events.

“We miss having that interaction on our campus and that routine, and just the daily things that happen on a high school campus. We would like to get back to normal as quickly as possible, but we also have to do it safely.”

No fans in the stands, less money and excitement

“I think COVID will have a negative impact on my athletic funding until we can get back to some sense of normalcy with playing sports and having crowds to watch,” said Rudy Alvarado, athletic director at Arcadia High School in east Phoenix. “The longer we go on without sports, football and boy’s basketball in particular, the longer it’ll cut into what I can do. The gate receipts on those two sports provide the bulk of what we take in each year.”

Alvarado and several other high school athletic directors across metro Phoenix say the budget impact will likely be delayed until next season, because gate receipts usually are used for subsequent seasons.

“If the pandemic limits the number of guests we can have at our games,” Alvarado said in an email, “then it’ll definitely cut my funding for the ’21-22 school year. My gate receipt is probably 70 to 75% of my spending money so losing that will hurt.”

Autumn Daniels, the athletic director at Agua Fria High School in Avondale, said the delay and limits to games because of the pandemic will mainly affect ticket sales, booster clubs’ fundraising efforts and student athlete fees.

“The biggest impact that I would say would be not having gate money,” Daniels said. “Without games and without sporting events and athletics, we don’t have that money coming in. We used a lot of the gate ticket sales to help with maintaining and purchasing things that we need for the future.”

High school booster clubs are also dealing with fallout from the pandemic.

Booster clubs help and support high school student athletes and coaches by raising money for sport programs for high schools in their community.

“Some of our fast-food sponsors put us on hold because they were not sure how this was going to affect them and if they were going to be able to survive it or not,” Elizabeth Dahl, who is the booster club president at Highland High School in Gilbert, told Cronkite News in a recent interview.

“In our program, our money not only provides equipment and things like that, it also provides team meals at all three levels and extra workout gear,” Karen Eulate, booster club president at Red Mountain High School in Mesa, told Cronkite News. “Those are the things that will probably be on the chopping block because they are not directly tied to student safety on the field, whereas equipment is.”

Daniels said new uniforms for athletes may be temporarily placed on hold in the Agua Fria Union High School District.

“Uniforms is one thing that our district has already communicated might take a hit, so they are prioritizing those in terms of years and condition of them and how they’ve been used,” she said, adding that the district may roll over funds left from last year’s athletic budget.

Even as revenues are challenged, expenses have risen over such items as hand sanitizer, thermometers, disinfectant and face masks for players.

“We purchased about 200 masks for our athletes as well,” Daniels said. “A lot of the other sanitation items have been purchased from the district level to support us, too. I think that’s going to have an impact is really having to keep up with those items that wasn’t something that we had as part of our budget previously.”

Are high school sports on the chopping block?

Potentially empty stands mean Agua Fria, in the West Valley, is considering some creative ideas to bring revenue to its games.

“The fans are what makes the sporting events and athletics with their spirit and excitement,” Daniels said. “We’ve talked about doing ticketless sales and cashless sales, so everything would just be done with a program called GoFan. That might be a possibility and, essentially that would be screening everything, so watching everything live or online.”

Gofan is an online service for high schools around the country that allows fans to buy and share digital tickets online to high school sporting events. Hewitt-Trussville High School in Alabama and Gainesville High School in Georgia are among the schools that plan to utilize the digital ticketing service for all athletic events this upcoming school year.

Some high schools may have to cut some of their sport offerings to save money.

“We’re very worried,” said Karissa Niehoff, the executive director for the National Federation of State High School Associations in a report by aspenprojectplay.org. “We are hearing across the country that schools are facing anywhere from 20% to 50% budget cuts – very dire straits.”

“State (athletic) associations are looking at anywhere from $150,000 to over $2 million in losses to support programming and tournaments,” Niehoff said.

Jon Hanson, athletic director at San Miguel High School in Tucson, hopes to maintain his school’s athletic programs during the pandemic but understands the financial reasons that go into cutting athletic programs for most schools across the nation.

“The sad part with athletics, it’s one of the first things to get cut and it should be one of the last things to get cut,” Hanson said. “Because in most districts, it’s 1% or 1½% of your total operating budget. So it’s really small – there’s a lot of other things that could be looked at instead of athletics. Unfortunately, that’s the sore thumb that sticks out.”

Fits and starts to workouts as safety takes the lead

Team workouts across metro Phoenix have been conducted in fits and starts. What had brought a sense of normalcy to coaches and the players was suddenly halted on June 29 as the Arizona Interscholastic Association (AIA) announced that all high school sporting activities would be delayed until Aug. 17, the start date set by Gov. Doug Ducey.

Earlier in June, high school football programs across the Valley had been working out as teams and participating in limited football activities based on AIA pandemic guidelines.

Some of the phase one AIA guidelines included:

Dan Hinds, head football coach at Desert Vista High School in Phoenix, acknowledged that although the delay is difficult for high school sports, he fully supports the decision.

“Once the governor came out with his address, we basically shut down what we were doing that day, as far as practice goes. I understand that what we are doing is safe for kids so I support it 100 percent,” Hinds said.

“It’s been difficult through this thing, for everybody, not just for Desert Vista, but for all high school football programs.”

But he believes guidelines from the federal Centers for Disease Control and Prevention and the AIA is the main priority as everyone continues to navigate life through the pandemic.

If football is to be played this fall, schools must be cleared to go into phase three of the AIA guidelines.

“When you look at the research on athletics, there’s a clear benefit for those kids who participated in athletics and extracurricular activities, in their lifetime,” Hanson said.

One major study by Ohio University’s Online Master’s in Athletic Administration Program shows parents of about 7.8 million children believe it improves children’s mental and physical health as well as provides them with the necessary skills to advance in their future careers.

The California Interscholastic Foundation announced on July 20 that all high school sports seasons will be delayed until December or January. The Maryland Public Schools Athletic Association announced Aug. 3 that all Maryland high school athletics will be postponed until at least January.

High school sports in Arizona are expected to start in late August, according to an AIA announcement Aug. 5, azpreps365.com reports. However, high school football coaches and athletic directors are unsure of what the near future holds for them and student athletes this school year.

“We’re just kind of going off the information that we are given. It’s really hard to tell what it’s going to look like,” Hinds said. “We don’t really know what the (AIA’s) plan is. Does that mean we’re going to play three less games? Does that mean the season is going to be pushed back into the winter sports? We don’t know what type of adjustments they’re going to make.”

Scott Hare, the head football coach of Mesquite High School in Gilbert, said that although he hopes a football season can happen, he is prepared for multiple scenarios.

“The COVID spike is definitely worrisome for me, in terms of what’s going to happen and there’s just such an unknown right now with the fall,” he said. “I’d like to be able to play football, but I also need to prepare for the possibility of the season being moved back and even worse than that, possibly even eliminated.”

Daniels is among athletic directors, coaches and fans who look forward, one day, to games.

“We definitely miss the athletes, families, kids and our communities at all levels. So, I’m super excited to see the kids again and looking forward to their energy and renewed appreciation for each other,” Daniels said.

“I’m a firm believer that athletics helps teach kids life lessons and character. I think as challenging and tough as this time is, the adversity will help us come back better and stronger than ever.”

“You miss hearing the sounds of the gym and the weight room,” said Pete Jelovic, athletic director at Centennial High School in Peoria, of the possibility of high school sports on hold. (Photo by Dave Adamson/Unsplash) 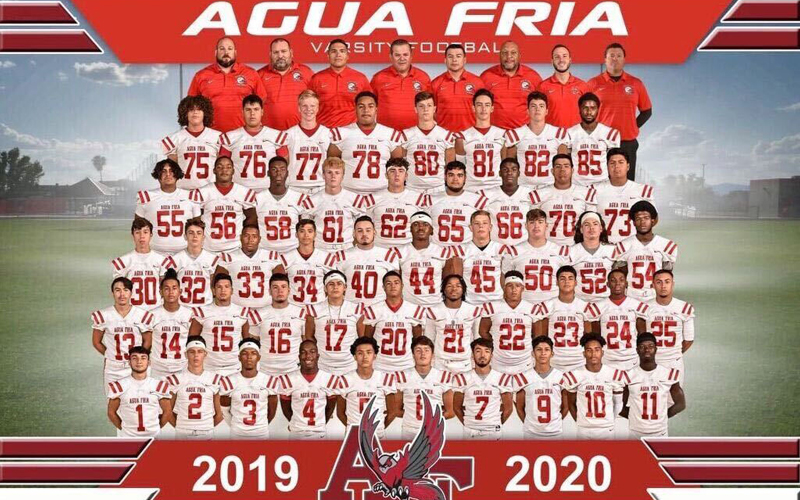 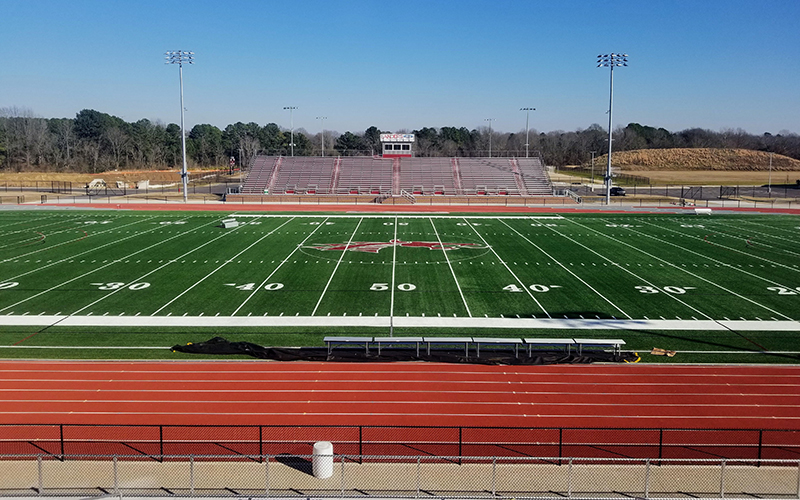 Stands potentially empty of fans during the normal high school season in the country could mean creative ways to bring revenue to high school teams. (Photo by Simon Ray/Unsplash) 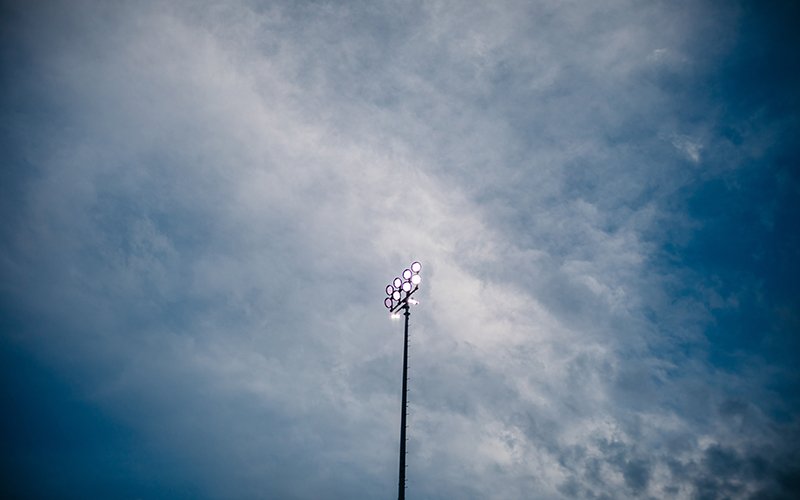 Some high schools may have to cut their sport offerings to save money. “We’re very worried,” said Karissa Niehoff of the National Federation of State High School Associations in a report by aspenprojectplay.org. (Photo by Steven Abraham/Unsplash)