The Arizona Department of Economic Security is “doing everything possible to get Arizonans benefits as soon as possible,” which includes hiring more workers, approving more hours and taking applications by phone, an agency spokesperson said.

The new jobless claims come as travel and tourism in the state have been hit “so quickly and so significantly” by cancellations from travelers worried about coronavirus and restrictions on foreign travel into the U.S. It also led to the cancellation of spring training for Major League Baseball teams in Arizona, a popular destination for sports fans.

The job losses also come as some of the largest cities in the state ordered the shut-down of bars, restaurants, gyms, theaters and other gathering places in an effort to stem the spread of the virus.

Gov. Doug Ducey took similar steps Friday, ordering the closure of such businesses in counties with at least one confirmed COVID-19 case. There were six such counties when he issued the order Thursday night, but that jumped to 11 over the weekend, including all but four counties in the restrictions.

Ducey also ordered an expansion of jobless benefits Friday, in response to businesses cutting hours or temporarily closing as recommendations grew that people stay at home.

Those changes include waiving the one-week waiting period to file an unemployment claim after losing a job, and waiving requirements that recipients search for a job. The expansion also adds people who work at businesses affected by COVID-19, who have to quarantine or who have to care for someone with the coronavirus.

Currently, Arizonans who lose a job through no fault of their own can receive unemployment benefits for up to 26 weeks and receive up to $240 per week.

Kim Sabow, president of the Arizona Lodging and Tourism Association, said members of her association are reporting massive layoffs already, and the effects of the outbreak have put the hotel industry in a “horrific and unprecedented situation.”

“We’re in the middle of our high season in March with spring training and spring break, with this busy time in our state, and that stopped instantly,” she said. “The immediate pain felt by our business is unprecedented.”

She said the impact on her industry has been almost immediate.

“Our industry has been hit so quickly and so significantly,” she said. “The impacts have been felt immediately and they’re so far-reaching.”

The American Hotel and Lodging Association estimates that more than 25,000 hotel operations jobs and another 82,000 hotel-supported jobs could be lost in Arizona in the coming weeks due to COVID-19. Tourists spent $24.4 billion in Arizona in 2018, according to the Arizona Office of Tourism.

As jobless claims have risen, so have the number of people turning to food banks for assistance, said Jerry Brown, spokesperson for the St. Mary’s Food Bank Alliance.

Brown said lines at the food bank’s Knight Transportation Distribution Center in Phoenix have more than doubled since last week, going from 495 people last Monday to 1,250 this Monday. He said lines start forming two hours before the doors open.

“These are the type of lines that only see once a year – the week leading up to Thanksgiving. It’s Thanksgiving week every day right now,” Brown said.

He said food banks are giving extra food to each client to ensure people are able to stay home as much as possible. If someone normally gets 10 canned items and two frozen-meat items, they’ll get 15 cans and five frozen items, Brown said.

He said that food banks have taken a hit on donations from grocery stores, where shelves have been emptied and stores don’t have as much to donate. But stock at food banks is still good, he said, partially thanks to the community.

“The Valley has always been a very generous community and we’re seeing people ask how they can help,” he said. 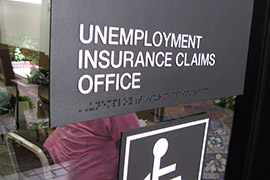 Jobless claims in Arizona jumped to more than eight times their normal level last week, to 29,000, as the first wave of layoffs from businesses affected by COVID-19 changes hit the state. In a typical week, about 3,500 claims are filed, state officials said. (Photo by Bytemarks/Creative Commons)